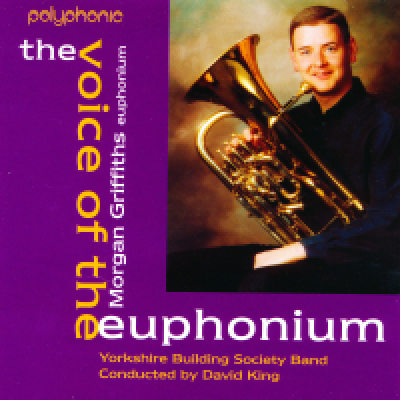 Morgan Griffiths was born in Batley, West Yorkshire into a strong brass banding family. He was taught the cornet in his formative years by his father Edward Griffiths himself a very successful brass band conductor.

After only a short period on cornet Morgan switched to Euphonium and studied with the legendary Black Dyke euphonium player and conductor Geoffrey Whitham, who was to have a major influence on Morgan’s playing style.

In January 1990, after a brief spell with the Hammonds Sauce Works Band, Morgan was the youngest player ever to be appointed Principal Euphonium of Black Dyke Mills Band where he established an international reputation as one of the finest euphonium players in the world. It was during this time that Morgan first came under the influence of the brilliant Australian conductor, and later mentor, Professor David King.  Whilst at Black Dyke Morgan won two European titles (1990 and 1991) and was a principle soloist in their very successful tour of Japan.

In 1992 he was invited to join the newly named Yorkshire Building Society Band, again working with David King. During this period Morgan became the most successful euphonium player of his generation, winning five European championships, three British Open titles, Three All England Masters Championships and a English Nationals win along with several Yorkshire area championships.  He also won two soloist awards at the Brass in Concert Championships.

In 1999 Morgan was awarded the much coveted title of ‘International Euphonium Player of the Year’ and it was also the year that saw him record his debut solo CD titled ‘The Voice of the Euphonium’.

In 2002-3 Morgan gained two National Championship titles with the Williams Fairey Band under Allan Withington as well as being voted the 4BarsRest outstanding instrumentalist and player of the year.

2004 saw Morgan return to YBS band where he gained another All England Masters Championship title as well as being a featured soloist on the bands 2005 ‘Kings of Brass’ tour of Australia, where one of the many highlights was performing a solo in the world famous Sydney Opera House. After this Morgan turned his focus to conducting and musical direction.

In 2007 Morgan was appointed the musical director of the newly named Hammonds Saltaire Band. Morgan has guided the band through a gradual rebuilding process which now sees the band back in top the Prizes at all the countries major competitions including the British open Championships from 2014, qualifying for the National Finals in 2011 (First Section) and 2017 (Championship Section) as well as regular appearances at the Brass in Concert Championships in Gateshead.

Under Morgan’s leadership the band now have many concerts, recordings and cross cultural projects to its name, and are establishing the bands reputation in the wider music world with projects like ‘Just a Vibration’ were Morgan collaborated with the Indian artist and composer Shri Sriram. This has seen the band perform at many international music festivals and has been a featured album on BBC Radio 6 and British Airways flights international flights. In December 2016 the music won the BASCA British composers award in the Brass & Woodwind Music category.

Morgan works for the Bradford Music & Arts Service as a Specialist Brass Tutor where he aims to inspire the next generation of brass players. In 2011 he formed the Bradford Youth Brass Band, which has already competed at National level with critical acclaim.

Morgan was the Music Director of the Bradford Youth Orchestra (BYO) for 8 years up until 2019. This  was extremely rewarding as the orchestra grows in musical stature. During the summer of 2013 the BYO performed its first full Symphony Concert performing Mendelssohn’s Symphony no. 4 “Italian”, and in 2014 won Innovation award for a performance of ‘Celtic Fusion’ at the Music for Youth National Festival, at the Symphony Hall in Birmingham.

In 2020, Morgan took up the position of Senior Lecturer at Leeds Conservatoire,  He has the responsibility of mentoring and guiding the next generation of talented euphonium students.