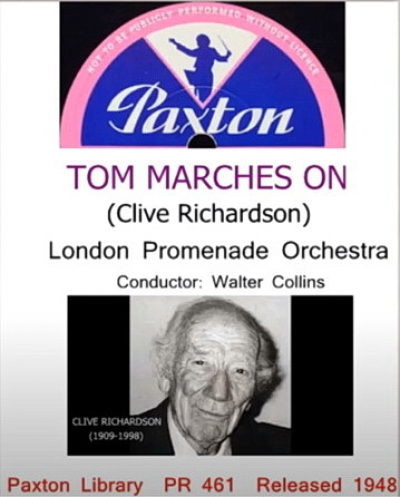 Light Music is a much maligned area of popular music, difficult to classify and frequently hard to find in the record catalogues or on modern radio stations. Yet for some 30 years this was the music that filled the media, at the cinema, on record and over the airwaves - indeed, the BBC had an entire radio station named after it.

Clive Richardson (1908 - 1998) was the last of the pioneers of light music. He was born in Paris of English parents, studied at the RAM. He composed mostly for orchestra, though his works included a number of songs, film music, 'the hymn of praise' Salute to Industry, for chorus and orchestra and an instrumental piece. 'Three Flemish Folk Tunes' for two harps and oboe, with the musical Goossens family in mind. Especially remembered for his relaxed short orchestral genre piece 'Beachcomber' (1949) and the 'London Fantasia' for piano and orchestra, a depiction of the Battle of Britain, but also worthy of mention are Continental Galop, White Cliffs, Running of th Rails. Most notably two signature tunes 'Melody on the Move' and the one featured on our show this week 'Tom Marches On', the ITMA march, just one of many contributions to that programme by him.

He was educated at Harrow School and despite showing prodigious talent in matters musical from an early age began training to become a doctor. Wisely switching to music, he enrolled at the Royal Academy of Music, where he studied a variety of instruments, including piano, and took conducting tuition from Sir Henry Wood and composition with Norman O'Neil. He swiftly achieved his LRAM and ultimately became a fully fledged Associate (ARAM) which remained a source of great pride to him.

In 1937, he joined the Gaumont British Film Company at Lime Grove, and under the musical director Louis Levy he composed and orchestrated sections of some 100 films, in collaboration with such future greats of the light- music world as Charles ('Dick Barton') Williams, Jack ('Picture Parade') Beaver and Hubert ('Cornish Rhapsody') Bath. Seldom was a complete score composed by one person and invariably Levy took sole screen credit.

He was also involved in numerous Jack Hulbert and Will Hay comedies and may well have had a hand in Hitchcock's 'The Lady Vanishes' (1933) and Nicholas Brodszky's score for 'French Without Tears' (1939).

At the outbreak of war he immediately ceased all musical activities. Already an officer in the Territorial Reserve, he was posted to a succession of Ack-Ack Battalions and served in Coventry, Manchester and Birmingham. His experiences of the bombing in these cities and both the horrors and courage that he witnessed were the inspiration for his 'London Fantasia', a short concert work in the spirit of Richard Addinsell's 'Warsaw Concerto' (Dangerous Moonlight, 1941), and it proved to be Richardson's first popular hit (the recording with the composer at the piano accompanied by the Columbia Light Symphony orchestra conducted by Charles Williams was a best seller in 1945/46).

Also around this time he teamed up with fellow pianist Tony Lowry (former arranger with Henry Hall's dance band) to form the duo 'Lowry and Richardson - Four Hands in Harmony', an unexpectedly successful turn that toured the still-flourishing variety circuits. They made several film appearances including 'My Ain Folk' (1944) and later a series of Rank fillers, 'For Your Entertainment' (1952) featuring a performance in what must have been the tiniest studio on the lot. Two grand pianos and a troupe of dancing girls alarmingly fill the screen almost to bursting point.

The immediate post-war period saw Richardson at his most productive. In addition to the performing he was invited to work on the ITMA (It's That Man Again) radio series which featured a weekly orchestral interlude, performed by the Variety Orchestra conducted by Charles Shadwell. Uncopyrighted popular melodies, folk songs and nursery rhymes were the order of the day, and Richardson's inventive and lively new interpretations proved to be a great success. Rediscovered a few years ago in the BBC vaults, many of them were freshly recorded by the BBC Concert Orchestra and played as the centrepiece to the recent nostalgia series 'Legends of Light Music'; they stand up well to this day.

Meanwhile, in the music- publishing world, several major companies began recording works on their own labels, to provide pre-packaged music to the film, radio and soon- to-be television industries. Chappell, Francis Day and Hunter and Boosey and Hawkes began commissioning mood music compositions from Richardson. The post-war boom in light music had begun.

Among dozens of gems a handful of classics are still fondly remembered by music enthusiasts of a certain age. 'Holiday Spirit', for example, composed for the Chappell's library became the theme of BBC television's Childrens Newsreel, 'Tom Marches On' (for Paxton publishers) was the closing march in ITMA. 'The Shadow Waltz' (by a pseudonymous 'Paul Dubois') became the theme to the Francis Durbridge television series, remade as the feature film 'Portrait of Alison' (1954), while 'Melody on the Move' gave its title and theme song to a long-running music radio series of the 1940s.

Continuing to write into the 1960s and 1970s he freely acknowledged that the call for music in his style was limited in an era of pop, and he was delighted when the Chandos library recently commissioned him to compose material for a new nostalgia CD.

In l988 he received a token of recognition from his peers when the British Association of Songwriters Composers and Authors awarded him their Gold Medal for services to the world of music, a belated acknowledgement of his exceptional work in the field of light music.