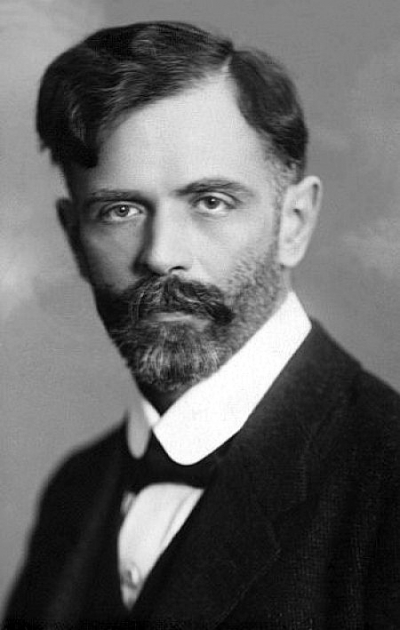 Zoltán Kodaly; b:16.12.1882 – d: 6.03.1967) was a Hungarian composer, ethnomusicologist (someone who studies the music of the world), pedagogue (teacher), linguist, and philosopher. He is well known internationally as the creator of the Kodaly method of music education.

Born in Kecskemet, Hungary, he learned to play the violin as a child.

In 1905, he visited remote villages to collect songs and recording them on phonograph cylinders. In 1906, he wrote a thesis on Hungarian folk song, ‘Strophic Construction in Hungarian Folksong’. At around this time he met fellow composer and compatriot Béla Bartok, whom he took under his wing and introduced to some of the methods involved in folk song collecting. The two became lifelong friends and champions of each other's music.

Partly because of the World War One and subsequent major geopolitical changes in the region, and partly because of a naturally rather shy temperament in youth, he had no major success until 1923.

His first wife was Emma Gruber died. In December 1959, Kodaly then married his 19-year-old student at the Franz Liszt Academy of Music with whom he lived happily with until his death in 1967, at the age of 84 in Budapest.

In 1966, he toured the US and gave a special lecture at Stanford University, where some of his music was performed in his presence.

Throughout his adult life, Kodály was very interested in the problems of many types of music education, and he wrote a large amount of material on teaching methods as well as composing plenty of music intended for children's use. Beginning in 1935, along with his colleague Jenő Ádám (14 years his junior), he embarked on a long-term project to reform music teaching in Hungary's lower and middle schools. His work resulted in the publication of several highly influential books.

The Hungarian music education program that developed in the 1940s became the basis for the Kodály Method. Although Kodály himself did not write down a comprehensive method, he did establish a set of principles to follow in music education, and these principles were widely taken up by teachers (above all in Hungary, but also in many other countries) after World War II.

The city of Pécs commissioned a full-length bronze statue, located in Szent István square, in his honour in 1976. According to the wishes of the sculptor, the work stands with its back to the Cathedral and facing a former playground, so that it was facing children, whose musical education was the most important thing in Kodaly’s life. He is depicted as a fragile old man walking amongst the horse-chestnut trees.

At one point during the Hungarian Revolution of 1956, the Workers Councils decide they should form the government with Kodály as president "because of his great national and international reputation.

On this week’s show we have music from his Háry János is a Hungarian folk opera which has been arranged for brass bands by Ray Farr.