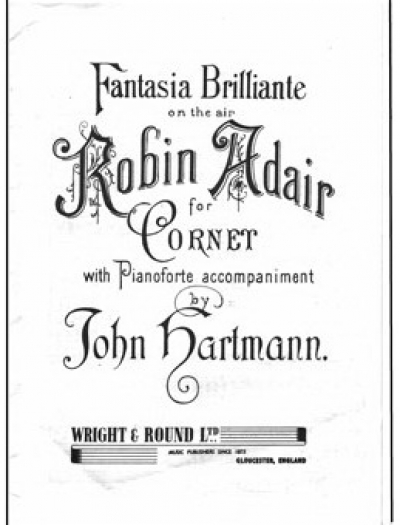 John Hartmann (24.10.1830 - 1897 in Liverpool, England) was a Prussian brass composer. He is notable for having served Prince George, Duke of Cambridge as bandmaster in the British 4th Regiment, 12th Lancers

When Hartmann went to fulfill his mandatory service obligation to the Prussian military, he chose to be a musician. Doing that gave him the option of choosing the regiment he would serve with. He chose to serve with the Cuirassiers in Cologne. While with the Cuirassiers, he played solo cornet and violin. In 1854, his bandmaster, Herr Schallehn, left service and travelled to England, joining the Crystal Palace Company. Hartmann joined him when his service was over in October 1855. John's brother Ernest also joined Schallehn (prior to John).

Hartmann continued to play cornet in the Crystal Palace Band until he was offered the position of bandmaster of the Tyrone Militia at Sheffield. He served with them, with the 1st (King's) Dragoon Guards, and with the Royal Sherwood Foresters (Nottingham Militia), who were "one of the best brass bands in the country." He organised the band of the 2nd Battalion of the (King's Own) 4th Foot at Chichester. He served with the 4th Foot Guards in Corfu, and the 12th Lancers at Hounslow for four years (turning it from a mediocre band to a professional band).

While serving with the 12th Lancers, Hartmann was invited with his regiment to serve the Duke of Cambridge in Aldershot, Leeds, and Manchester. He did this until a requirement to be enlisted in the military forced him to choose to end his career.

Afterwards he returned to Germany, and not liking it, retired again in England, doing compositions and arrangements of music for British publishing companies.

Here are some of the solos that brass band players will be familiar with:

On this week’s show we are featuring his Fantasia Brilliante ‘Robin Adair’ played by euphonium soloist Sydney Poole with the CWS (Manchester) Band conducted by Alex Mortimer in 1960.