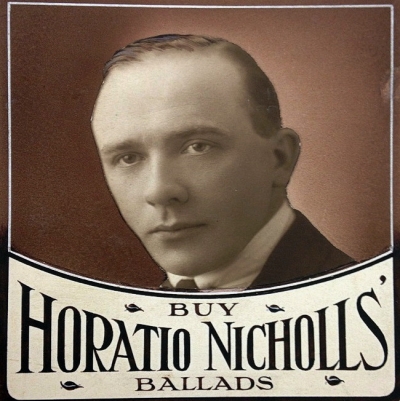 Lawrence Wright (15 February 1888 – 19 May 1964) was a British popular music composer and publisher. He was born in Leicester and opened a music shop in the city in 1906. A short time later his first song, "Down by The Stream", was published, and by 1912 he had established the Lawrence Wright Music Co in Denmark Street, London. Wright went on to write (or co-write) over 600 songs under his own name and as Horatio Nicholls, including the World War I propaganda song "Are We Downhearted? No!” and would receive an Ivor Novello Award in 1962 for Outstanding Contribution to British Popular Music. He was one of the very rare composers of popular music in this period to make a substantial amount of money - it had not been unusual to see composers who had written dozens of hits die in poverty

In 1927, Wright appeared in a short film made in the De Forest Phonofilm with excerpts of his revue Sensations of 1927.

His 1927 collaboration with Edgar Leslie, "Among My Souvenirs", has been covered by artists including Frank Sinatra, Louis Armstrong, Judy Garland, and Connie Francis.Wright founded Melody Maker magazine in 1926. He moved to Blackpool in the early 1920s and became a show promoter. Running "On with the Show" on the North Pier for a record-breaking 32 years (1924 - 1956). He lived in a mock castle house, later called the Castle Casino, on Blackpool's North Promenade. After he began using a wheelchair, he moved to a bungalow in Carlin Gate. After being sold, many items of memorabilia were discovered at the address including posters, bills, letters, sheet music and musical scores.

In 1930 he composed Amy, Wonderful Amy, a song about Amy Johnson.

On this week’s show we feature the poplar brass band march compilation Cavalcade of Martial Songs which was arranged for band by Gordon Mackenzie.