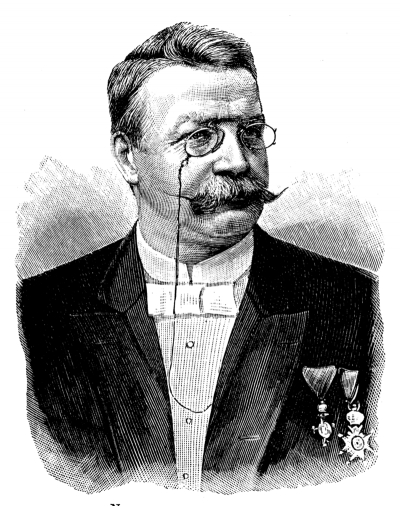 Thomas Koschat (8 August 1845 – 19 May 1914) was an Austrian composer and bass singer. He popularised Carinthian folk music across Europe and the Americas. Carinthia is a southern Austrian region in the eastern Alps that encompasses Austria’s highest mountain.

From 1865 to 1867 he attended the Technical University of Vienna, studying chemistry, but he did not obtain a degree. Instead his imagination was captivated by music, and he formed his first vocal quartet in 1866. He joined the Vienna State Opera in 1867, singing bass. In 1874 he joined the choir at St. Stephen's Cathedral. From 1877 until 1906 he performed with the Koschat Quintet. That year he also joined the choir at the Hofmusikkapelle and served as soloist there.

As a composer he was known for his Kärntnerlieder, folk songs of Carinthia arranged by himself, or else his own compositions set in that style. With his men's quartet and quintet, he toured Europe and the Americas, where the performances of his Carinthian music were enthusiastically received. For most of his life he resided in Vienna. Nonetheless he was made an honorary citizen of Klagenfurt in 1907 owing to the local nature of his work. Koschat died in Vienna, at his home on Strobachgasse in the 5th district, on 19 May 1914. He was buried at      Annabichl near Klagenfurt.

He composed numerous pieces for choir, in addition to quartets and songs. Many of these are in waltz time and focus on Carinthian themes and locales. Additionally, he published a book of poems in the Carinthian dialect.

A museum dedicated to Koschat was opened in 1934, containing letters, manuscripts, portraits, awards, recordings, and other memorabilia related to his life and output. Heavily damaged during the Second World War, the museum was rebuilt and reopened in 1951 from funds raised through private donations and lotteries. The museum is open May through September for a couple of hours each day.

We feature one of his most famous compositions on this week’s show The Schneewaltzer (The Snow Waltz). Many bands will be performing this popular waltz as part of their Christmas concerts. Our performance features the Thoresby RJB Band MD: Stan Lippeatt - 2000