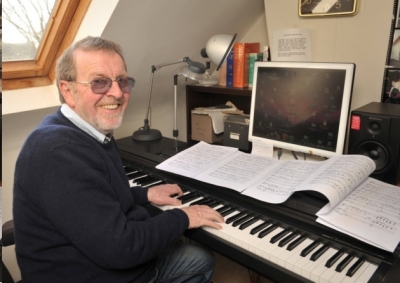 Denis King was born in Hornchurch, Essex, he began his musical career at the age of six as a banjolele-playing singer at childrens’ matinees. By the age of 13, with his two older brothers, Mike and Tony, he had formed one of the most successful pop groups of the Fifties and Sixties, The King Brothers - Britain’s first Boy Band. When the group disbanded in 1970, Denis studied orchestration at the Guildhall School of Music in London, got his break in television writing the theme for The  Adventures of Black Beauty, which won the Ivor Novello Award, and, to date, has created themes and incidental music for well over 100 television series.

His debut as a theatrical composer was with the Royal Shakespeare Company's production of Privates on Parade on Parade which won the Ivor Novello Award for Best Musical, and he then went on to collaborate with many theatre legends - Alan Ayckbourn among them - to write over 25 stage musicals including Worzel Gummidge, A Saint She Ain't and Stepping Out - The Musical, all for London's West End.

His career has encompassed every aspect of show business from singing to performing, from producing to composing, and the artists he has worked alongside read like a who's who of British and American stage and screen: Tony Bennett, Nina Simone, Howard Keel, Sammy Cahn, Albert Finney, Dame Edna Everage, Maureen Lipman, Elaine Stritch, Dudley Moore, Jimi Hendrix, Ronnie Corbett, Sophie Tucker, Frank Sinatra, Judy Garland - many of whom feature in his popular memoir, 'Key Changes', an extremely frank, funny, personal account of the highs and lows of show business, from post war Twice Nightly Variety to the present day.

In this week's show we are featuring Galloping Home played by the Roberts Bakery Band conducted by Colin Cranson in 2011.