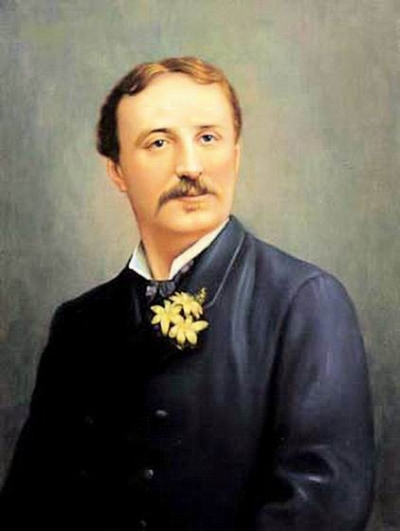 Luigi Denza (24 February 1846 near Naples, Italy died in London 27 January 1922 and was composer. He studied music at the Naples Conservatory and in 1884 he moved to London where he taught singing and became a professor of singing at the Royal Academy of Music in 1898

He is best remembered for "Funiculì, Funiculà" which he wrote in 1880, a humorous Neapolitan song inspired by the inauguration of the first funicular cable car at the summit of Mount Vesuvius.

Neapolitan journalist Peppino Turco contributed the lyrics and may have prompted the song by suggesting that Denza compose something for a song-writing competition. "Funiculì, Funiculà" was published the same year by Casa Ricordi and within a year had sold a million copies

In addition to "Funiculì, Funiculà", he composed hundreds of popular songs. Some of them have been sung by Enrico Caruso, Mario Lanza,  and Luciano Pavarotti,.

He was also an able mandolinist and guitarist, and for these instruments he wrote a number of compositions - he also wrote the opera, Wallenstein which he wrote in 1876

In this week's show we featured this highly popular work by Luigi Denza.