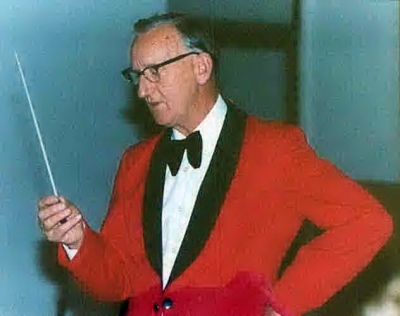 Norman Goffin of New Zealand started playing the cornet at age seven in the Foxton Salvation Army Band. By the age of fifteen he was conducting. Before settling in Christchurch he featured as a soloist and played for a number of Salvation Army bands around the country. He conducted the Christchurch Citadel Band for eight years prior to sailing with the 2NZEF in 1940 as deputy conductor of 20th Battalion Band, and later the 4th Brigade Band, in association with his younger brother Dean, later to become Salvation Army Commissioner Sir Dean Goffin.

In 1953 he was transferred to Wellington with the Shell Company. Also in that year he was chosen to tour with the 1953 National Band of New Zealand. It was when this triumphant band returned home later that Norm took over the Tramways Band which had just won the `C’ Grade Title. Regular radio broadcasts and regular contesting saw the band improve at a rapid pace under his musical direction. After five second places in the `B’ Grade the band finally won the `B’ Grade in 1965. The band went on to win the `A’ Grade title in 1969 and 1981. As well as these National titles the band won the Provincial Title most years that Norm conducted the band.

During the period Norm was conducting the band he was for a time a member of the Wellington Regional Orchestra. He was also on the `Call List’ for the New Zealand Symphony Orchestra as a trumpet player. He also found time to tour and play in the 1962 National Band and was deputy conductor on the 1974 National Band’s tour to the United States and Canada . In 1970 and 1971 he conducted New Zealand ’s first National Youth Bands, something he really enjoyed.

Norm was also a very keen singer being in a church choir for many years. Following his retirement as conductor of the band he sang bass with the acclaimed Orpheus Choir for nine years.  He maintained his membership (all members being subject to regular re-auditioning) until 1992 when in his eighty- first year.

Norm was a tireless worker for the training of young musicians for brass bands. He was always very encouraging and supportive of all amateur musicians and gave generously of his time.

In 1980 after seventy years as a player, conductor and administrator he was awarded the Queens Service Order for services to the brass band movement.  An award he richly deserved.

Probably more than any other conductor Norm’s tenure as conductor over a thirty year period has had the greatest impact on the band. Under his direction the band was held in high regard both locally and nationally. He was always a popular conductor and, with his wide musical experience, had the respect of all players over this successful period.