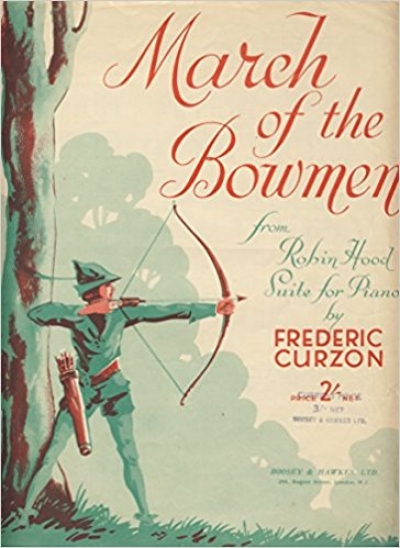 Frederic Curzon was born in London in 1899, and died at Bournemouth in 1973.As a boy he studied violin, cello, piano and organ. He had a life largely associated with music - besides composing, he conducted and was both a pianist and a noted organist.

His early life was largely in the theatre, where he was musical director in several London West End theatres. In 1938, he moved to the radio and became a full time composer, the music he wrote was mainly of the English light music genre. He also wrote for films, radio and the theatre.

He became the Head of Light Music at Boosey and Hawkes having been encourage by Ralph Hawkes. Much of his output was for orchestra, but there were also songs of the ballad kind many of these were written in the 1950s.

Amongst his works was the Robin Hood Suite which ends with the rousing, indeed noble March of the Bowmen. This work was first performed by the BBC Symphony Orchestra on the 18 October 1937.

On this show we feature Frank Wright's arrangement of the March of the Bowmen a very popular brass band concert work during the 1960s and 70s.