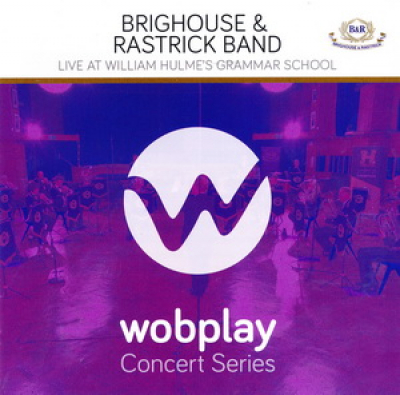 This is the second CD in the Wobplay Concert Series that I have reviewed.

Just looking at the items listed on the programme is an indication that this CD contains music to suit most tastes. Classics in contrasting styles, tunes both popular and rhythmic and at least one quiet piece. Three soloists are featured.

I must just say though, I am a little confused when, as in this case, there is a note saying, ‘Recorded Live’. It is quite obvious that there is no audience present. It is only following the solo items that there is applause, and this was only sparse giving the impression that it only came from fellow band members. This isn’t a complaint, just an observation.

German composer Richard Strauss’ ‘Festmusik Der Stadt Wien’  is a fitting opener and is performed with style and clarity. It was written during WWII and dedicated to the Vienna City Council. This version, credited to a person named just Johnson?, is a shortened version of the whole work, but in this context it fits the bill adequately.

The overture that follows is new to me, and I can’t say that I am familiar with any of the composer, Friedrich Kuhlau’s works,  All I know is that he was German born and spent most of his working life in Copenhagen and became known as a writer of Danish Nationalist Music. The ‘Elverhᴓj Overture’ is from his opera of that name and the final section of the work was adopted as the Royal Danish Anthem.

The arrangement for brass band is by Daniel Drage. The overture opens with a series of full-blooded regal full band sounds. It moves into a slower quieter section before gathering pace. There is a return to these big sounding chords now interspersed with fast moving passages. The piece ends with a big broad regal tune.

This is an impressive piece of music, well suited to the brass band medium. The band produced some massive sounds and I got the feeling that they were enjoying playing the music. I think band people will enjoy listening to this and will want to include it in their future programmes, I know I would.

Written by American cornet player Frank Simon of the John Philip Sousa band in an arrangement by Sandy Smith, ‘Miss Blue Bonnet’ is a delightful show piece for cornet. Fashioned in the theme and variation mould, this brilliant solo is performed here with style, panache and artistry by principal cornet player Tom Smith.

From the sound track of the eighth James Bond film ‘Live and Let Die’,  written and recorded by Paul and Linda McCartney with their group Wings, provides an excellent vehicle for soprano soloist Martin Irwin to show off his beautiful tone and technique. I have been a James Bond fan for many years, both the books and films, and whilst this is not one of my favourite themes it is here given excellent treatment both by the band and the soloist.

The third solo spot is taken by Xylophonist Tom Hall with an arrangement by Rodney Newton of Jan Berenska’s ‘Taps in Tempo’. In his programme notes,  Russell Gray mentions Fred Astaire, and indeed it is reminiscent of his dance sequences in those black and white films of the 1930s and 40s. That is of course for those of us old enough to remember.  But whatever one’s age, this soloist brings 2½ minutes of excellent entertainment into the programme.

Written by American jazz guitarist Pat Metheny and sensitively arranged for brass band by Svein Henrik Giske ‘Letter from Home’ is a beautiful quiet reflective piece which gives one a sense of peace. Conductor Russell Gray creates a performance of charm and feeling, getting some beautiful sounds from the band with a wonderfully calm and serene closing few bars.

Sweet Georgia Brown’, the well-known jazz tune by American song writer Ben Bernie, is given some real foot tapping treatment by the band in this upbeat arrangement by Goff Richards.

Gordon Langford’s arranging skills are shown to good effect in his treatment of sea shanties in his ‘Fantasy on British Sea Songs’. This is an interesting performance, and I very much enjoyed the interpretation portraying the varying moods of the tunes, bringing a new freshness to the piece.

Just over two minutes of tunes and rhythms from the pen of Malcolm Arnold provided another facet to the varied content of the items on this CD. From his second suite of ‘Four Scottish Dances’, we hear the ‘Vivace’ with its swirling kilts in the fast-moving reels. Perhaps its portraying a Hogmanay party? particularly when bass trombone player Steve Lomas sounds like he has had a few drams of whisky. Another fine performance.

I admit to being an admirer of the music of Russian composer Ilych Tchaikovsky, both his ballet music and his symphonies. In this splendid arrangement by Derek Ashmore of the ‘The Finale from Symphony No 4’ we can appreciate the music and the virtuosity of the band in both the fast-moving sections and in the slower quieter parts. The band produces some magnificent sounds and the conductor’s interpretation  brings out the best of the music. An absolutely stunning performance. Bravo!

The programme notes tell us that no concert is complete without an encore. The item they have chosen to fill this spot is an arrangement by Gordon Langford of ‘La Danza’, a bright tarantella by Rossini. It provides a fitting finale to the recording.

Listening to this recording has been a great pleasure for me. I have enjoyed every single piece. The programme is well balanced, and the band is on top form. It must be one of the best recordings I have ever listened to. Apart from the conductor and band praise is also due to all who have been involved in the production of the recording.

The eight-page insert contains information about the band, pictures of the soloists and of the band and names of the instrumentalists are listed. The programme notes are by conductor Russell Gray.

Congratulations to all who had an input into producing this fine recording.