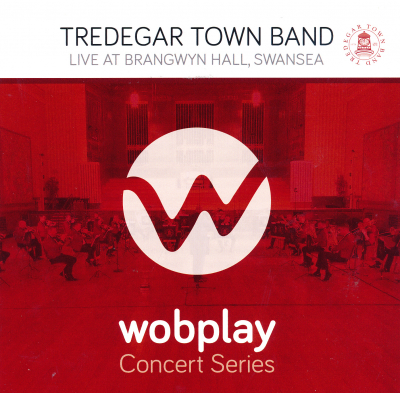 The first track on this disc is Richard Strauss’s Vienna Philharmonic Fanfare arranged by the band’s bass trombone player, Andy Austin. It is played with pomp and splendour and gives a grandiose regal opening to the programme with its fanfares and full sounding harmonies.

Latvian composer’s Eriks Eŝenvalds’ Only in Sleep, originally a choral work based on a poem by Sara Teasdale. Is arranged for band by Phillip Littlemore. It is just over six minutes of quiet reflective music and provides a beautiful simplistic contrast from the opening item.

Glorious Ventures by Peter Graham features the band’s principal cornet player, providing him with a vehicle with which to display his virtuosic talents.  The melodic theme is developed with flowing flourishes leading to a brilliant ending. It was delightful to listen to it.

Dewi Griffith swapped his cornet for a flugel horn to join Will Norman in Stephen Bulla’s duet arrangement of The Wind Beneath My Wings. I’m afraid it was not just to my liking. It is my feeling that this song, which leans somewhat towards being devotional, is better presented in its uncluttered version, particularly if one has the words in mind as one listens. Having said that, the playing from both performers was excellent.

Guest euphonium soloist David Childs joins the band for two items. Peter Graham’s Brillante is a gem of a solo and David’s performance, with many of his own added embellishments, shows that he is not only keeping up the high standards set by his father and uncle, but some would say that with this level of performance, surpasses them. He goes on to display a fine tone, phrasing and control in his father Robert’s arrangement of Lament’from Karl Jenkins’ Stabat Mater.

Richard L Saucedo is a composer I am not familiar with. His American Barndance is what the title suggests giving just under three minutes of high jinks as we imagine cowboys, (and cowgirls) dancing around followed by a calmer section with them sitting and resting on bales of straw, (or is it hay?) before ending in a joyful mood. I enjoyed this bit of light relief.

Perhaps best known for his film scores Ennio Morricone has produced many lovely tunes and his La Califfa, written for an Italian film, is played here with feeling and tonal beauty by soprano soloist Ian Roberts. It was a pleasure to listen to.

Paul Hindmarsh’s arrangement of Vaughan Williams’ Rhosymedre was well performed by the band, but the music didn’t really hold my attention.

Tenor Horn soloist Ross Dunne gives a powerful virtuosic performance in Owen Farr’s fine arrangement of the Finale from Joseph Haydn’s Cello Concerto. He demonstrates brilliance, clarity and a fluency that would be hard to surpass.

A sensitive performance of Peter Graham’s Renaissance brings the recording to a close. This was to me the most satisfying piece on the disc with its use of Joy Webb’s beautiful song ‘Come into our world’, fragments from the hymn tune ‘St Francis’ and a finale based on Joseph Barnaby’s hymn ‘When Morning Guilds the Skies’. I found this to be wonderfully uplifting.

Whilst the playing on this CD was at a very high standard throughout, the choice of music wasn’t always to my liking. Yes, there were moments when I was in awe at the performance level of the band. Certainly, the quality of sound and execution was excellent and conductor Ian Porthouse is to be congratulated on his direction and control of the whole performance. The eight-page insert contains copious programme notes by Iwan Fox, a picture of David Childs, some historical information about the band, a list of the band’s playing personnel and a very small picture of the band on the back page.