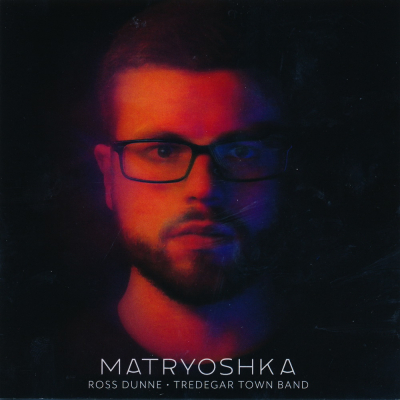 This first CD by Ross Dunne, is a wonderful showcase for an outstanding Tenor Horn player. Only 21 years old at the time of recording he has a track record having played at the top level in Wales for a number of years. Between 2016-19 he studied at the Royal Welsh College of Music under his friend and long - time mentor Owen Farr (also arranger of three of the works on the disk).

Performing with his ‘own’ band – Tredegar – with MD Ian Porthouse at the helm, Ross CD performs, for both listener and the participants, an interesting and different programme.  This is a mélange of the familiar, ‘book – ended’ by specially commissioned music from his contemporaries - Daniel Hall (b.1996) - Forgetting How to Be Human and from Jasper Dommett (b.1997) – Matryoshka.

Matryoshka  is the longest and most challenging work. ‘Little Matron’ dolls, as they are known, consist of a set of wooden dolls of decreasing size (up to eight) placed one within the other – each one becoming smaller and simpler. When opened, the quality of the folk art - wood turning and painting - of these Russian dolls is revealed.

Jasper Dommett, fascinated by these dolls from an early age and inspired by Schoenberg’s concept of ‘multi - dimensional structures ‘(perhaps think Charles Ives ‘Country Band March’), has created this work of four movements. As the music unfurls, the ideas and themes set out in the opening movement are developed and the artistry of both the composer and the soloist is revealed. Whilst dangerous to categorise (no ‘isms’ here), phrases like ‘atonal or pantonal’ ( ie without reference to tonal centres, avoiding harmonic or melodic formulae) or ‘12 tone’, give a flavour of the genre.

The composer creates colour and sounds which can only be drawn from soloists willing and able to explore the potential of their instrument. And, in support, is the Tredegar Band – a fine and enterprising band with a track record of innovative partnerships.

Movement 1 –  Cadenza - is a strong declamation of ideas, explored via rapid chromatic work, beautiful executed, technically assured multiple tonguing and exciting accompaniment from the band. The remaining movements explore and develop those themes (just like the reveal of the wooden dolls). In the 2nd Movement, close harmonies in the accompaniment provide a tranquillity and lyrical textures over which the soloist soars effortlessly. Movement 3, using multi – tracked, electronically enhanced Tenor Horn backing creates an ethereal sound and provides for a regular interchange between the band and soloist. The final movement revisits some of the early ideas leading to a magnificent virtuosic climax.

A challenge certainly to those whose ears have been accustomed melody, accompaniment, regular rhythm and 4 or 8 bar phrases and brought to a satisfying conclusion by a Perfect or Plagal Cadence.

Let the music speak for itself. Listen, listen again and again! A tour de force from Jasper Dommett, Ross Dunne and the Tredegar band.

Forgetting How to Be Human, the other ‘bookend’ was commissioned in 2019 from Daniel Hall (b.1996). The music takes its inspiration from the ‘individual being in an isolated state, locked in one’s mind, independent with their thought’.

Sparsely scored and demanding virtuosity from the soloist (and the band), it exploits the Tenor Horn - its range, tonal qualities and timbres. The angular writing, complex and varying time signatures and rhythmic sequences with themes developed and inverted, results in a constant and increasing state of agitation and enter, in the words of the composer ‘a zombie state of mind’.

Ross Dunne and the band bring it off with confidence, aplomb and con spirito. This music is mesmerising and similarly bears multiple listening’s.

Two arrangements from the classical repertoire are included. The Cello Concerto by Haydn was lost for almost 200 yrs., and only ‘found’ in 1961. This delicately scored transcription of the Finale by Owen Farr works well for the Tenor Horn. Allegro Molto, it requires stamina, flexibility, a wide tessitura, nifty finger work and articulation to cope with the challenging ‘passagework’ (a display of technique for the audience, with little thematic or structural importance). Some of it fits more comfortably under the fingers of the cellist than a brass player. However, another tour de force.

The other four works will be familiar to the listener. In Song to the Moon from Dvorak’s opera, arranged for Ross by Owen Farr, the title character – Rusalka, a water nymph is in love with a prince and pleads to the Moon to reveal her love (sic). This tragic fairy tale reflects Hans Andersen’s Little Mermaid, where a water nymph takes human form so she can spend time with her prince (a Tenor inevitably)—but is forced to return to her lake when he rejects her.

This is one of Dvořák’s most glorious creations - a simple melody rising to a haunting refrain over gently shifting chords. Here is a performance of rare musical empathy between the performers – reminiscent of the best of chamber music.

Ross confirms his maturity and approach in the remainder of this programme which consists of  Lark in The Clear Air – ‘melodic perfection’ - arranged by Gordon Langford, where the soloist and the band realise the wonder and beauty of the tune with simplicity, sensitivity and without sentimentality. Excellent control and phrasing throughout. The performances of Autumn Leaves (Joseph Kosma arr., Bill Geldard) and Evergreen (Barbra Streisand arr. Alan Catherall) confirm that this rising talent, Ross Dunne (and the Tredegar Band) are at the top of their game in all genres of music.

A great CD produced by SP and S. Visually attractive, comprehensive programme notes (Thomas Dunne) and well worth a purchase.