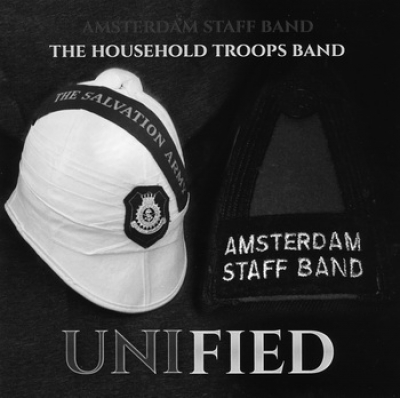 Recently released Unified – SPS435 – which brings together the talents of the Amsterdam Staff Band (ASB) : Bandmaster - Olaf Ritman and The Household Troops Band (HTB) : Bandmaster - Carl Saunders – is a welcome addition to any band enthusiast’s library.

The tracks on the CD recorded in early 2020 were due to be released and promoted at a joint concert in Amsterdam during 2020. The rest is history!

A superb performance of Unified (David Edmonds) by the HTB provides a fanfare welcome to a well - chosen and executed programme of music by Salvation Army composers. This play list includes something old, something new; some published works and others yet to be shared with a wider audience – all influenced by the Composer’s and Bands’ missions. And, crucially many of these items could be programmed in a band concert and not just restricted to religious settings.

Both bands include a major, extended work allowing them to showcase the leadership of the MD’s and talents of the players. Evening Variations composed by Olaf Ritman, based on the tune “Evening” by Bramwell Coles is a beautifully and tightly crafted miniature theme and variations. This piece (and indeed others) requires great confidence and versatility from the musicians. The Staff Band responds to those challenges.

Corpus Christi, written by Robert Redhead for the ISB in 1994 and is now regarded as ‘a milestone staple of repertoire for Salvation Army bands worldwide’. Still fresh 25 years on, it is played regularly on concert platforms by brass bands around the world. It is also a showcase for the many talents of Household Troops and their conductor Carl Saunders.

Three compositions by Steve Ponsford are featured – The Break of Day and All Creatures Praise by the Household Troop and Cross Rhythms by the Staff Band. The latter piece commissioned in 2016 reflects the various emotions of the Easter story, convincingly executed by the Staff Band.

All of the music based on Christian themes, is beautifully constructed and performed. Steve Ponsford exploits both traditional and new tonal combinations and in the case of All Creatures expects the players to imitate vocally the sounds of wild animals(sic).

And as always, creative and imaginative use of an extended and versatile percussion section.

Other pieces include A Voice to Call by Jörgen IJsendorn (First cornet in the ASB) a technically and stylistically challenging work and performed with great aplomb and conviction by his fellow soldiers. Michael Rosenquist (Euphonium) and Steef Klepke Jr. (Cornet) are the soloists in Novella by Ben Hollings. Original written for the Eminence Brass Quartet (Messrs. Marshall, Cobb, Farr and Childs), this performance convinces - with lyrical playing by the soloists, subtle and supportive accompaniment (of a sparsely scored work) and providing a reflective piece for the audience. Well done.

The Household Troops shine again in a convincing performances of Living Power (based on ‘Lord, for the years’), commissioned by the Enfield Citadel band from Tom Davoren in 2016.

In My Unchanging Friend by Ivor Bosanko based on ‘Yesterday, today, forever’ and the words ‘I want, dear Lord a heart that’s true’ there is an outstanding performance by Euphonium player Anthony Smith. After a lyrical first section we have a clean virtuosic Viennese waltz, concluding with a restatement by the band where the soloist emerges triumphantly. Again band produces a great, well rounded sound, energy and clarity in the technical passages. And, excellent percussion.

Completing the Staff Band’s contribution is Unbounded Love from the pen of Olaf Ritman. Based on the tune ‘Prayer to the Power of Love’ – a song only used in the Dutch Salvation Army. Dedicated to the Band’s former Soprano player, Hein Voskamp, the band reaffirms its international reputation and reminding us of it performances at the Royal Albert Hall at ISB 2012 and that haunting performance of We are Not Alone – again by Olaf Ritman).

All in all a great CD, visually attractive, well presented and produced by SP and S, comprehensive programme notes and a high quality recording in venues in the UK and The Netherlands reinforcing the high standards we have come to expect from the premier bands in the Salvation Army.

I look forward to hearing the bands live, when the 2020 Lockdown has been lifted and to hear more of this programme being performed on the concert stage.