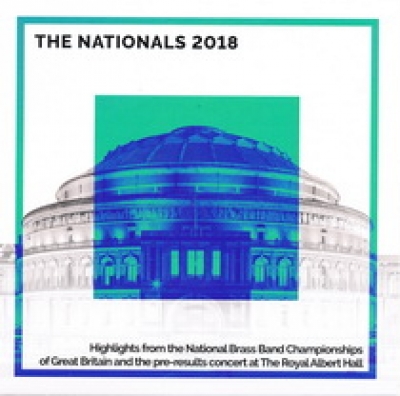 This CD contains the winning performances of all five sections of the 2018 National Brass Band Championships of Great Britain. It also contains items from the Royal Air Force Squadronaires big band at the pre-results concert at the Royal Albert Hall.

It goes without saying that all the recordings are of the winning performances, and in all sections are notable so, I am not going to do an adjudication on the performance, it is the music that I shall concentrate on. They were all judged to be the best on that day which made them British champions of their section. A great achievement for them all whatever section they won.

Fourth section winners, Stamford Brass conducted by Julian Bright are first up with a confident performance of Darrol Barry’s Divertimento for Brass. I can well understand why this was a popular choice with this grade of bands because not only was it a good test but with its fanfare style opening, a beautiful romance and bright rhythmic finale it will be useful for use as a concert item.

Gareth Churcher’s Episodes for Brass, which was the set test for section three, was given a well thought out structured performance from winners Barnsley Brass under conductor William Rushworth. The work was written to be played at the composer’s wedding. It contains contrasting musical episodes with fanfares, bells of celebration, an elegy and a lively ending. Did I hear references from Elgar, Westminster chimes and John Williams? Like the Darrol Barry piece mentioned above, this will fit well into any band programme.

Firestorm was inspired by the war in the Persian Gulf and the emotional effect that it had on composer Stephen Bulla. I’m not familiar with this work and can only comment on what I hear. It is of a more serious nature than the two pieces mentioned above and whilst the musical demands seem fairly straightforward its sound colours, expressive range and characteristics are at times verging on the complex. I found this performance from the Middleton Band conducted by Kevin Gibbs quite moving. I suppose when one knows the story behind it, it makes for an emotionally interesting experience.

Oldham (Lees) Band, conducted by John Collins were winners of the first section. The test piece, King Arthur – Scenes from a Radio Drama, was an adaption by Paul Hindmarsh of Benjamin Britten’s score for the radio dramatization of the legend of King Arthur. The work sounds somewhat symphonic in style and is interesting throughout. The band surmounted all the complexities, of which there are many, to give an extremely fine dramatically interesting performance of this music. There was the odd blemish, but for me it did not spoil the overall picture.

Kenneth Downie’s Handel in the Band provided a challenging test for the Championship Section Bands. The work, which was written for the 2013 Swiss Championships, is somewhat of a showpiece for the brass band, making challenging demands on both players and conductor. Its main theme, Handel’s well known Sarabande, from his Keyboard Suite in D, can be heard throughout the piece. The work has its lighter moments making it very listenable. I can well imagine those present at the Royal Albert Hall on the 6th of October to hear this performance which won Foden’s Band under conductor Russel Gray the premier prize,   were on the edge of their seats from the first note to the dramatically impressive fugal ending. This rendition was full of interest, drama and was faultless. My words, what a performance.

Interspersed between the serious businesses of contest pieces were items from the pre-results concert which featured the Royal Air Force Squadronaires. The four pieces are; Lionel Hampton’s Flying Home transcribed by Barry Forgie, Ted Heath’s arrangement of the Rogers & Hart song Where or When, Gordon Goodwin’s up tempo march A Few Good Men and an arrangement of the Roger’s and Hart number Manhattan.

This is an excellent CD, full of interesting music. The programme notes by Paul Hindmarsh give an insight into both the music and the performances. They are written in an easy to read narrative format and a reading through them adds to the enjoyment of this listening experience.