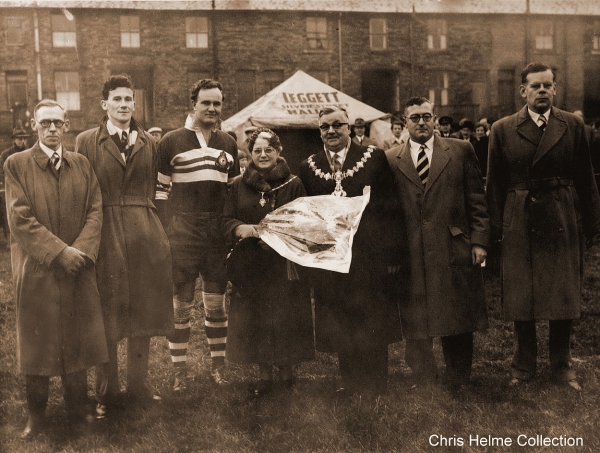 This photograph of 1957 celebrated a big day in the history of the Old Bodleian's rugby union football club. This was the occasion when the club saw its new ground on land known in those days as Smallwood's Field, which is now occupied by the Sandholme housing estate, officially opened by the Mayor Councillor Harry Edwards.

Although the club had been playing on the pitch for a few weeks it was Saturday November 16th when the ground was officially opened and to celebrate the game on that day was against Old Thornensians.

It was estimated at the time with the exception of the A and B teams and some diehard fans that had travelled with them to Thorne almost the whole of the Hipperholme district turned out to watch the match.

The players were introduced by the two captains, David Harrison presented the Mayoress a bouquet and finally the Mayor kicked off and by the final whistle the result was a draw.

From those days the club has its headquarters up at Woodhead and continues to thrive with numerous teams.

I am sure the those on the photograph all those years ago would be rightly proud at everything the club has achieved and built up since those days.