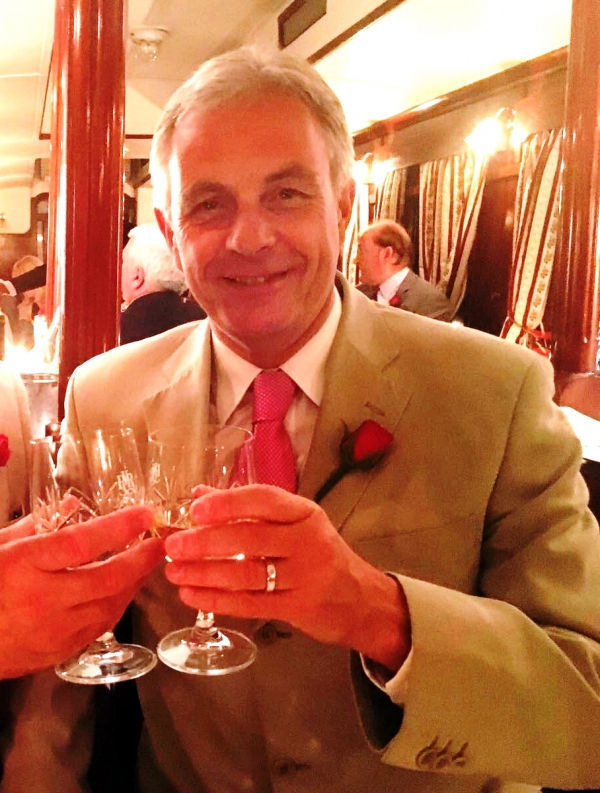 'Is it really a year since our last dinner and gathering of old school friends?' Something I am sure many of the members will be thinking. Even after so many of these annual gatherings it is still an event they all look forward to.

This year's event will no doubt have many of the usual ingredients ensuring it will be a great night. It will give the members of the association the opportunity to catch up with old school mates, share memories and no doubt a few well worn tall stories as well. This is a wonderful annual tradition and long may it continue.

The guest speaker for this years' annual dinner is Chris Jenkinson who retired in March last year. Born in 1957, Chris was brought up in Brighouse and attended St Andrew's Infant and Junior Schools. In 1968 he left the comfort of his junior school to walk through the gates at Rastrick Grammar School to join the new intake of students.

He was to leave Rastrick Grammar School with, as he says 'just 7 'O' levels and 2 'A' levels', and felt he had not really achieved all he had hoped to. It was about four years after he left Rastrick that he realised that if he wanted to get on in life he would need to further educate himself.

That decision saw him embark on a three year course of night classes in Halifax where he gained his BEC National Certificate in business studies. Having completed his successful studies in Halifax he enrolled at Huddersfield University on a two year course. The successful outcome saw him awarded a Diploma in Industrial Management.

In 1976 he applied to join the West Yorkshire Police, serving in Brighouse and Elland. He left the police service in 1979 and started a new career in management. His first post was at Bancroft's in Halifax where he was the shop manager and buyer.

From this first taste of management he progressed to being a branch manager at Wolsely plc in Leeds, the plumbing and heating trade suppliers. In 1987 he joined the RAM Kitchen company as a buyer and then a promotion saw him elevated to the role of senior buyer. Through the 1990s his career at RAM knew no bounds culminating with a position as the purchasing and operations director.

After a successful 13 years at RAM he left the company to join Astracast plc, a Bradford based company as the operations and manufacturing director. This was a company that was a market leader in kitchen sinks, taps, accessories, acrylic baths and had been manufacturing granite and stainless sinks for 30 years.

After twelve months he was on the move again, this time to the Manchester based Polyflor Ltd, as the company's head of procurement. This is a truly international company which manufactured floor coverings and had a client base across the world.

After many successful years with this company he decided to leave and strike out on his own, a career move that was to be his last. In December 2009 he started his own company: Pro-Active Operations Ltd, as a business management consultant. In March of 2017 he decided that it was time to retire and move on. Following the closure of his business he was to look forward to a number of other activities many involving charity work.

Chris is married with two adult daughters, he is a keen tennis player having played in the Calderdale League for forty years at the Wellholme Park Tennis Club, Brighouse. For five years he enjoyed being the captain of the Queens Sports Club Men's Doubles team. Far from being an age related change, he took on the new challenge of crown green bowls at the Greenroyd Bowling Club in Halifax.

Following a personal family bereavement he took part in a number of challengers to raise money for the Candlelighters Charity. This included climbing mountains in Tanzania, France and Italy. He has taken part in numerous running and cycle challenges the length and breadth of the UK . Through these efforts Chris has to date raised over £51,000, a truly magnificent effort.

Chris is looking forward to meeting many of his old school friends.

This year's annual event is being held at the Crow Nest Golf Club on Friday March 2nd 2018, 7pm for 7.30pm. Former students of the Rastrick Grammar School who wish to attend are asked to contact John Howarth on e-mail: This email address is being protected from spambots. You need JavaScript enabled to view it. or on 07835 235195. Those wishing to attended are reminded that the new venue need to have confirmation of bookings and menu choices by the 16 February.

John says, “It would be good to see any of the 1968 to 1975 contemporaries of guest speaker Chris Jenkinson by joining the association members on the night. As every year the event is open to former students of Rastrick Grammar School from all eras”.