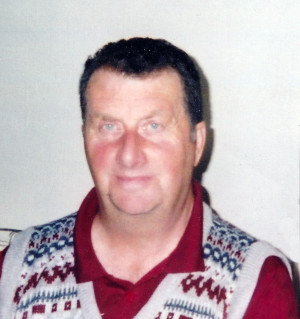 I left Victoria School in 1958 and had my interview for a job as a junior grocery worker in the Co-op office on Hangram Street with the Co-op grocery manager Floyd Bottomley. The interview must have gone well for me, he would have been impressed to see my prefects badge I was wearing, so much so I got the job.

My first job was in the Co-op Food Hall on King Street and I was paid £3.11 shillings a week. On arrival at work on that first day I had to remember which teacup belonged to each of my fellow workers and how many sugars each of them had.

Monday morning was always the same - washing the long windows with water trickling down your arm, just to save the Co-op having to pay money for a window cleaner. 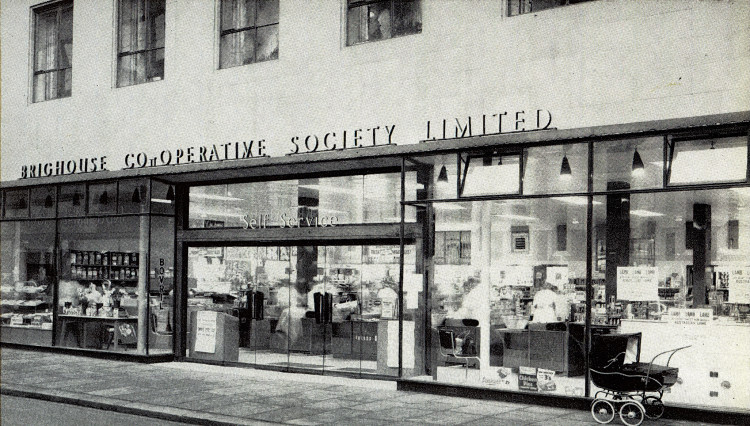 The manager of Food Hall was Alfred Crowther. The Co-op had a butchery  and bakery department with Frank Drake in charge and helpers Hilda Ellam and Frank's wife who was also the shop-steward. Also in the bakery section were two ladies Mary Wilson and Irene Holdsworth, on the check-outs were Velma Kitson, Lucy Tuthill and another called Minnie. 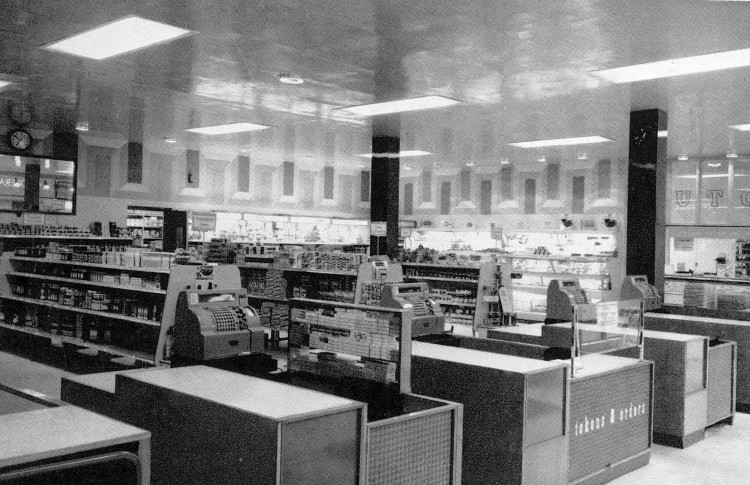 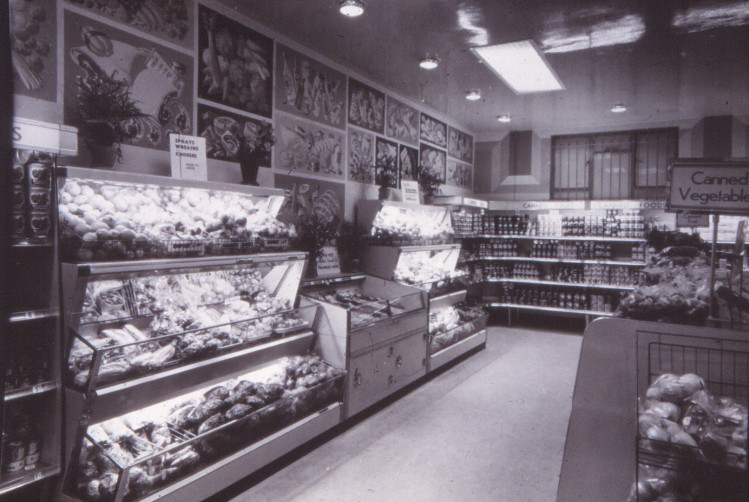 Shelves were filled up after I had brought the goods down from the warehouse for the juniors Les Riach, Ann Packer and Josie Eagles. The floor walker (security) was Stanley Tutin, who later married Hilda from the bakery department.

After working in town for about eighteen months I was sent out to work at some of the smaller branches to cover the holiday periods and sickness. This was in the days before electronic cash-tills I had to serve the customers, remember all the prices and add them all up out aloud in front of the customer.

The first branch I went to was at Waring Green   (seen here in 1899) which was at the crossroads of Waterloo Road with Garden Road, almost opposite the community centre. The manager was Herbert Mitchell who always stood behind you to ensure you had added the customers items up correctly. All the Co-op branches had assistant managers who were always referred to by Co-op senior management as 'First Man'. At Waring Green it was Les Nelson. 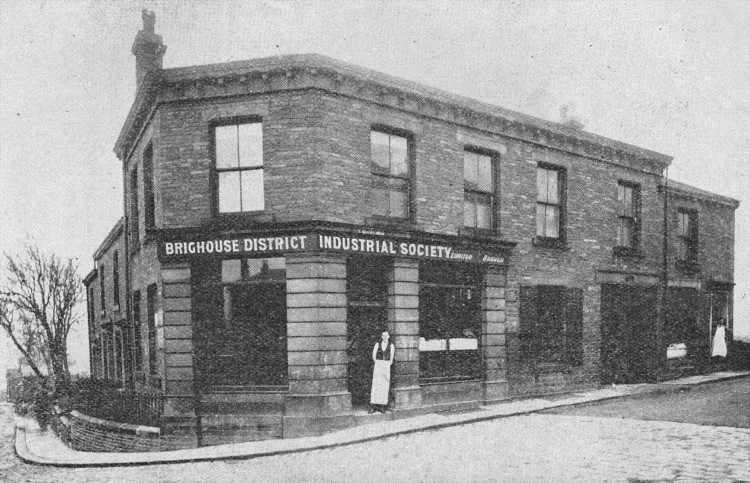 Waring Green Co-op branch c1899 with the branch manager stood outside. This branch was at the junction of Waterloo Road

with Garden Road almost opposite the community centre. It was demolished about 25 years ago

I also worked at the Smith House estate branch and although no longer a Co-op it is still a shop on Smith House Avenue. The manager was Jack Whiteley with Hilda Walker and Annie Hardy as his shop assistants. This branch was always very busy on Saturday's and only seemed to sell bread and potatoes. This meant that I had to almost continually go upstairs and send more potatoes down a chute to the ground floor staff.  The branch closed at 1pm on Saturday's but I was allowed to leave an hour early. In those days I was a playing member of the Halifax Town reserves and needed to be off early.

Other branches I worked at included Smithy Carr Lane with manager Raymond Holland and shop assistant Mary Atack. This Co-op branch was opened before the 1st World War. In this photograph the stone work is still very clean which indicates the building was still relatively new.

I also worked at the Bridge End branch with the manager Harry Dixon and his assistant Robert Sunderland, who in his later life was became the leader of Conservative group of councillor on Calderdale Council. Although it is not a Co-op branch anymore it was for many years used as a warehouse. Today, it is boarded up, but still shows signs of it once being a shop.  Connie Robinson was the shop assistant. 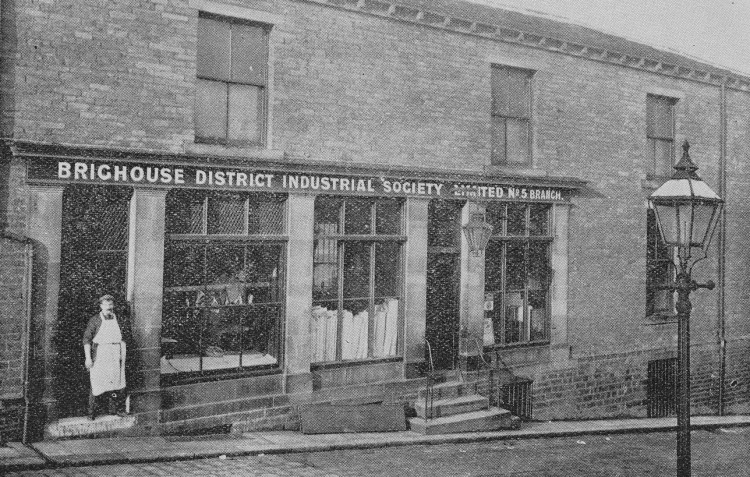 This is a view of the Bridge End branch c1899

Other branches included Brighouse Fields where the 'First Man' was Eric Nelson.  Who for many years was associated with the Brighouse Lions. Today  this building can still be found at the corner of Thornhill Road and George Street  Rastrick.  Whilst it is no longer a branch of the Co-op it is still as business premises.

I also worked alongside Norman Bottomley the manager at the Field Lane branch and Mr Riley the manager at Clifton. I spent time working at Thornhill Briggs, Stoney Lane, Wyke Common, Rastrick New Road. The last branch I worked at was at Brookfoot on Elland Road. This was when I was 22 years old and appointed as the youngest manager. My predecessors at Brookfoot were Walter Thornton, Herbert Walford, Alfred Crowther and Bob Hopper, names that some readers may recall. 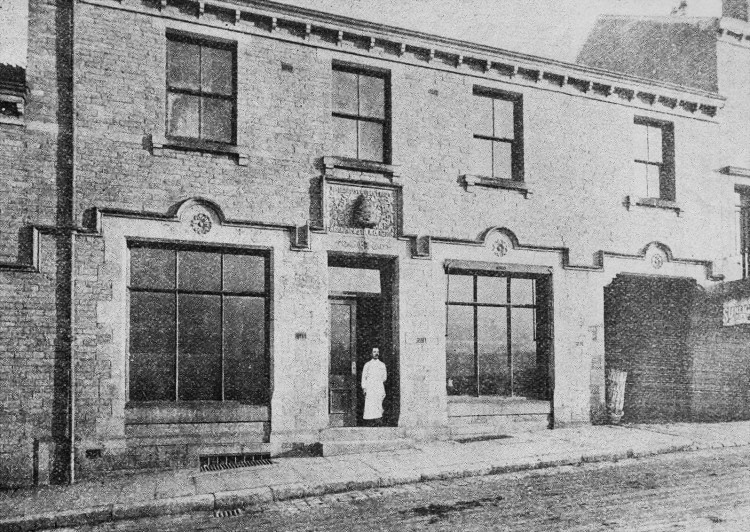 Looking closely above the door of the Brookfoot branch is a bee hive. In this close photograph of the bee hive it says 'Brighouse District Industrial Society Ltd - Branch No. 16 AD.1888'. This kind of sign can be found above most of the older Co-op branches in and around Brighouse. 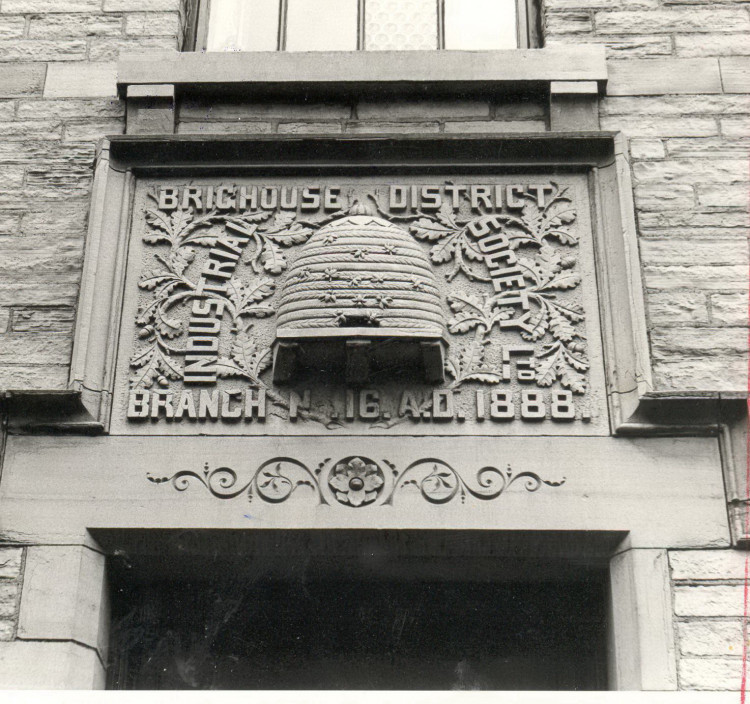 The Co-op Beehive above the Brookfoot doorway in 1982

Barry recalls that the Brookfoot branch  closed down in 1968 and over a relatively short period most of the network of branches in the Brighouse area closed as well.

Barry was the last manager at Brookfoot when it closed.

There will be more fascinating stories from the life of Barry Chapman to follow.