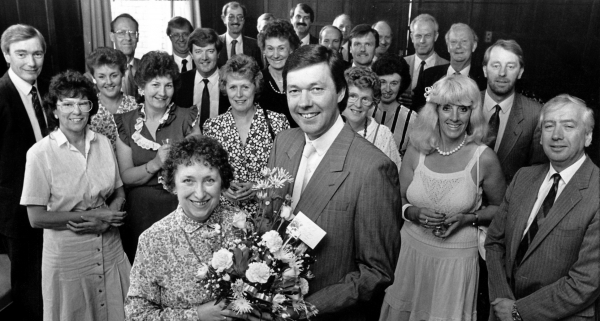 I remember receiving my police long service medal after 22 years service, and still have it carefully put away, a proud day it was too. But are similar things presented in industry today or now is this practice a thing of the past?  Whilst the police and similar organisations still do and Blakeborough's during the 1960s had regular evenings when certificates and badges were presented to celebrate long service by employees.

This was back in the days when many, if not most people would have just the one job or may be two jobs throughout their working lives. Those were also the days if you did get fed-up with your current job and decided to move on and look for a new job. You did not have to look far, check out the pages of jobs available in that week's Brighouse Echo. Or walk down Birds Royd Lane and you would see sign after sign on mill buildings displaying the current vacancies and there were always plenty to choose from.  If you handed your notice in on the Thursday, check out the Echo on Friday, more often than not you could get a new start on the Monday. How the world has changed since those days for what now seem a lifetime ago for some of us.

These days, if you have just had the one or two jobs a prospective new employer would say you don't have enough experience. In our day, if you had a few jobs some would suggest you are a waster because you were someone who could not hold a job down for long. Whereas today, the more jobs you have had the better you seem to be thought of - you are now described as experienced. Hmm, it's a funny old world.

Our featured photograph this week shows a cheerful looking Nellie Booth of Lightcliffe on her retirement day at T.F.Firth's in the 1990s.