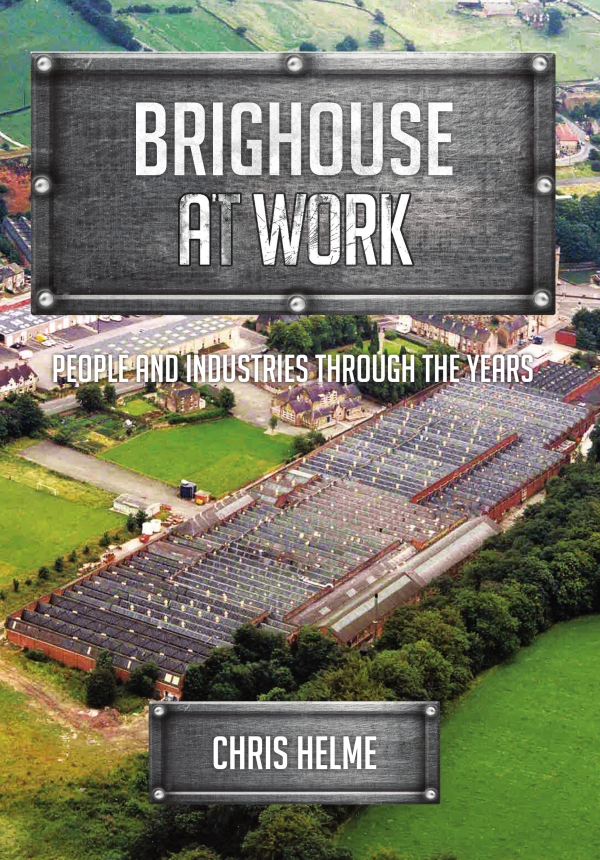 From a small hamlet and a bridge, the town of Brighouse in Calderdale grew rapidly with the building of the Calder and Hebble Navigation in the late eighteenth century, which led to the development of the town’s successful textiles industries.

Brighouse at Work: written by Chris Helme explores the life of this West Yorkshire town and its people, from pre-industrial beginnings through to the present day.

The industrial revolution was the beginning of the transition to new manufacturing processes from 1760 to sometime between 1820 and 1840.

Many of the town’s mills were built using local stone and quarrying continued as a major industry into the nineteenth century, which saw immigrants arriving from Ireland in search of work. With many of these workers going on to have families who still live in modern Brighouse, they now form part of a diverse community . Another important industry in Brighouse was flour milling and the giant silos, built by the family firm of Thomas Sugden & Son Ltd. Although, this is now an industry that has closed down, these structures still dominate the town today.

The Calder and Hebble navigation canal was constructed to navigate the un-navigable parts of the River Calder and was  completed in 1760. These two watercourses  weaved a path almost through its town centre.

Brighouse and a number of its surrounding communities were to expand into a nineteenth century power-house of industrial diversity. With the opening of its railway station in 1840 bringing even more prosperity.

Whilst farming did continue as it does today, but on a much smaller scale, many of the farm labourers sought work in the new industries. Those choosing to still work on the land many worked for the new commercial coal mining and stone quarrying companies started during the mid-nineteenth century.

Cotton, silk, woollen and flour mills became principal employers of the generations who worked in the giant mills of the industrial revolution in Brighouse. Today, these trades have gone, but industry still thrives in the town.

In a fascinating series of photographs, illustrations and detailed information, it looks at the impact that the Industrial Revolution had on the population and the consequences of rapid urbanisation and the changes in the industrial landscape during the Victorian era. The impact of war, and the decline of the town’s textile industries. It takes us through years of depression and decay to late twentieth-century regeneration and the town’s reinvention as a lively shopping centre and popular destination for visiting narrowboats.

The author Chris Helme - was for 30 years a serving Police Officer and awarded the British Empire Medal in 1990 for his service in the community. He has written / published eight local history books, brass band nostalgia and one taking a light hearted look at his policing career. He has written a weekly nostalgia column in his local newspaper for over 30 years and has also written a number of articles for UK local and regional magazines.

During the mid 1980’s he was beginning to be in demand as a speaker outside his usual job related presentations and has now developed a style that can both inform and entertain.

His presentations have often been described as ‘Infotainment’.  He has developed a presentational style that can both conjure laughter and melancholy through his various subjects and have been appreciated by many local groups.

He is a regular speaker at Luncheon Clubs, Rotary Clubs and Probus Clubs  throughout Yorkshire and averages 70 presentations annually. Even on his regular holidays to Cyprus he was asked to speak at an expat evening gathering at a hotel. In 2014 and 2015 he has invited to be a guest speaker on two cruise ships.

As the producer and presenter of ‘Sunday Bandstand’ since its inception in 2007 is his brass band radio programme which is now available through 14 community radio stations including Cyprus, Australia, New Zealand, USA and an expat station in France.

If you would like to know more about this latest book 'Brighouse at Work' or order a copy direct from Chris. You can contact him via his email This email address is being protected from spambots. You need JavaScript enabled to view it.       or through this website        www.chrishelme-brighouse.org.uk