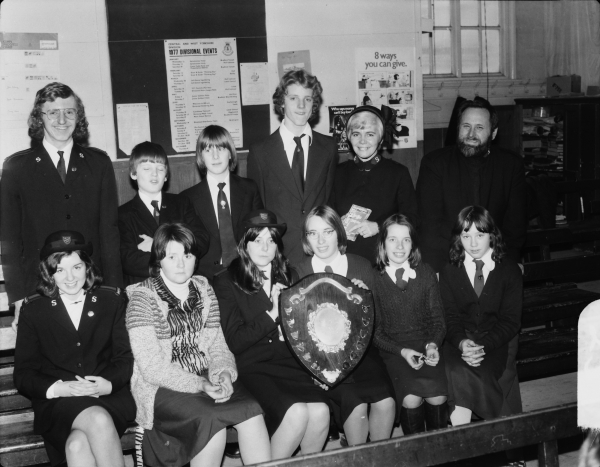 Other than the Poor Relief, an act of Parliament enacted in 1834, there were no state benefits during the nineteenth century. A situation that continued through to the early twentieth century, when Lloyd George introduced the Old Age Pension Act of 1908.

This saw the first state pensions being paid to people who had attained the age of 70 from January 1st 1909. In Brighouse by that first day 250 claims for the new five shillings (or today 25pence) a week pension had been made,. However, 15 were subsequently disallowed (population at that time was 22,000). The first person in Brighouse to receive the new Old Age Pension at Park Street Post Office was a man called Mark Clayton.

Before the introduction of this new pension welfare and social services were very much based on charity and handouts. In 1895, at Lower Edge a soup kitchen was established for the quarry workers who were laid off for weeks during the extremely harsh winter of that year - no work, no pay.

In 1903, charitable help was on hand following the Alexander Mill fire in Millroyd Street, (26 October) which saw hundreds of people put out of work. What was common on these occasions was that many of those people put out of work included children, parents and grandparents from the same family. Who all suddenly found themselves without money to buy the basics in life.

In 1829, William Booth was born in Sneinton, Nottingham, the second son of five children. His father was relatively wealthy by the standards of the time, but during William's childhood, the family descended into poverty. In 1842, William's father, who could no longer afford his school fees apprenticed William to a pawnbroker. Two years into his apprenticeship William was converted to Methodism.

In 1854, William Booth attended the Rev. Dr. William Cooke’s training school for New Connexion Methodist Ministers in London. He was ordained and began working as an assistant minister in London. He carried out religious services among the poor and was soon recognised as an efficient preacher. 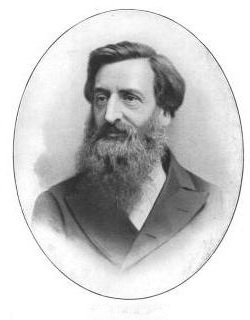 In 1855, he was appointed to the ministry in Gateshead on Tyneside, and the following year he returned Nottingham with an evangelistic mission. In the summer of 1857 the Booth family moved to Brighouse, where he was appointed preacher at the old Bethel Chapel. It was in Brighouse that William and his wife Catherine waged their first war against the employment of seven-year-old girls in a local mill. By 1859 he and his wife had left Brighouse and returned to Gateshead. There is a blue plaque on the wall of the old Bethel Church in Bethel Street, commemorating the fact William Booth served at this church between 1858 and 59.

In 1861, he left the New Connexion, finding it too passive and ineffective. Having parted company with the Methodists he became an independent itinerant preacher travelling widely around the country.

In 1865, he founded what was to become the Salvation Army in London, and became its first General (1878-1912). In 1878, this was a Christian Mission movement, but  with a quasi-military structure and government. It was renamed in 1880, as the Salvation Army, which was to spread from London, to many parts of the world.

It was in 1881 the Salvationists first came to Brighouse, with their first meeting held at the Oddfellows Hall. The ten salvation army ladies and six men attending met a frosty reception from a crowd that had gathered outside the hall. Having to dodge stones thrown by the crowd as they left. Any future use of the hall was out of the question. The group sought refuge in a stable at the back of the Black Swan (Briggate) but the pressure to leave became too great and they left the town.

The organisation was undeterred, and in the September another group returned to Brighouse and established themselves in rooms behind the Black Swan. But there were further ugly scenes outside this meeting room. Perhaps those who were the most upset were the licensees who saw  a noticeable drop in their beer sales.

In 1887 a further detachment arrived at the railway station and marched towards the Oddfellows Hall. This group had not arrived unannounced, there had been wide publicity days before their visit. Large crowds gathered on both sides of the road, with a highly visible number of uniformed police in a state of readiness.

Once again the Salvationists were attacked with stones and sods. However, this group unlike the previous visitors were determined to stay. Throughout the winter there were reports of some members of the group being set upon. There was even a report their big drum was stolen and subsequently smashed up. Gradually it was this group who managed to establish the Salvation Army in Brighouse.

In April of 1888, the Brighouse Corps received its colours and in the November General William Booth himself returned to Brighouse. In his address he reminded everyone this was not his first visit to the town, and took the opportunity of reminding them of his days at the New  Connexion Chapel in Bethel Street. 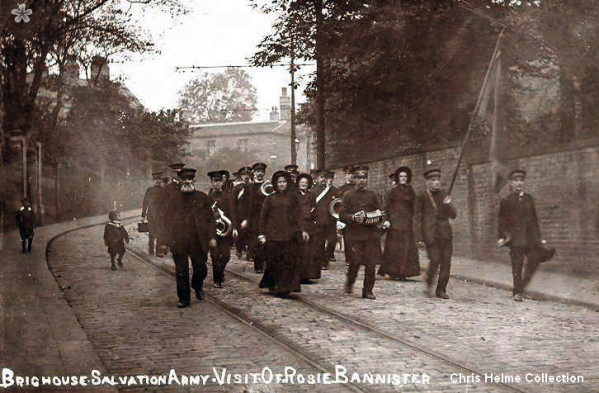 Here the salvation army band parade down Bonegate Road towards Bradford Road pre First World War. The tramcar tracks were laid for in 1904. The postcard refers to a visit by Rosie Bannister. She was described as 'a reformed character'  from Lancashire,and her transformation was celebrated.

In its early days the Salvation Army meetings were held at 'Central Hall', a small wooden built building in Bethel Street which had been erected in 1890. Captain Stott was appointed the missioner and paid thirty shillings (£1.50 pence today) a week and Patty Haynes led some of the meetings and was paid twenty shillings (£1 today) per week. The hall became known a '...Stott's Mission...'.

Just when everything seemed to be going well there was an undercurrent of problems. There was a split, with two members Matthew Wadsworth and Tom Denham staying at the mission, but a group decided to leave and moved to a room over Dennison's blacksmith 's shop in Mill Lane.

In 1905 General Booth was on a tour of England and on 11 August he visited Brighouse. He visited Land's House, Rastrick the home of Mayor Alderman William Smith JP and his wife Susannah. At the borough market (which was an area where the Wellington Arcade is today) he was presented with a highly decorated address complete with the Brighouse council seal and heraldic shield. As part of the civic reception he addressed a full house at the Albert Theatre. 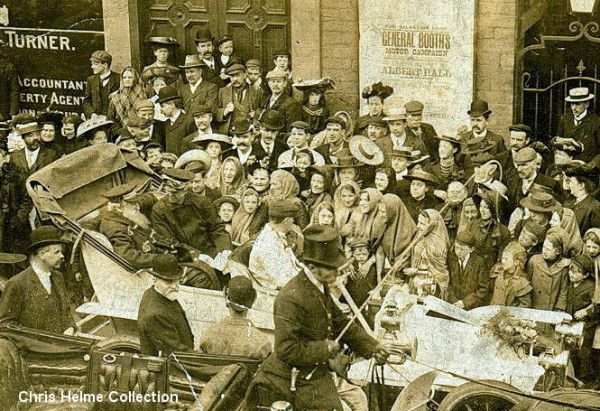 In 1909 changes were taking place in Bethel Street and the old mission was in the way. The members sprung into action to raise funds for a new citadel to be built close to the original mission site. The new citadel was formally opened by the mayor in September 1910, in the presence of a very large crowd. 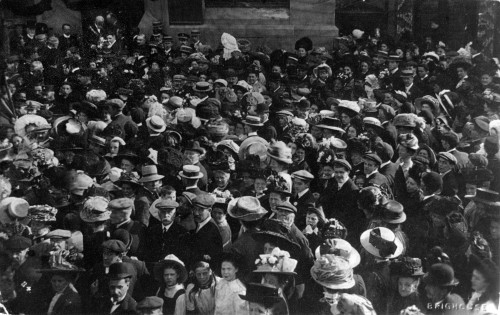 The Bethel Street Citadel saw many happy events and celebrations during its eighty five years and for many of its members was a second home. 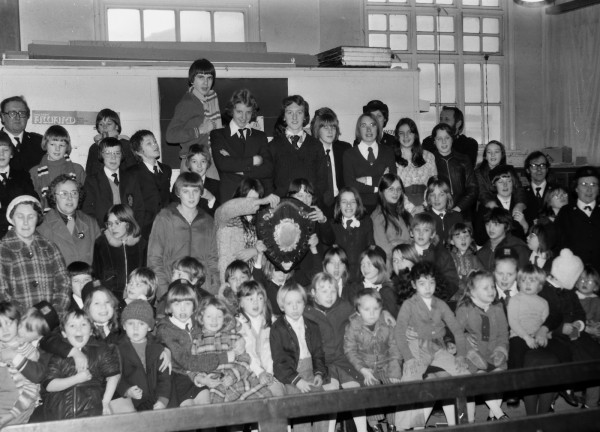 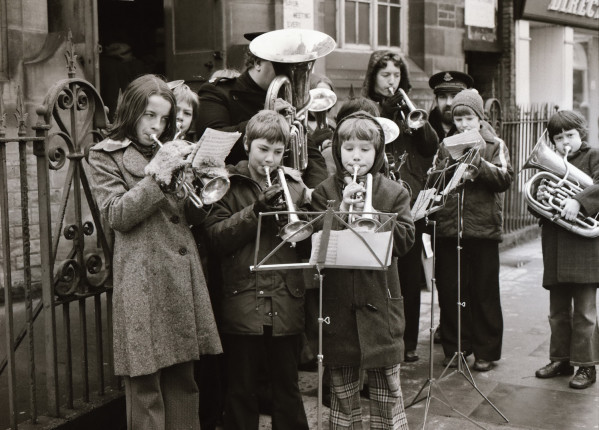 The Salvation Army have always celebrated with music, here are some of the young members

of the Brighouse Corps band in 1977 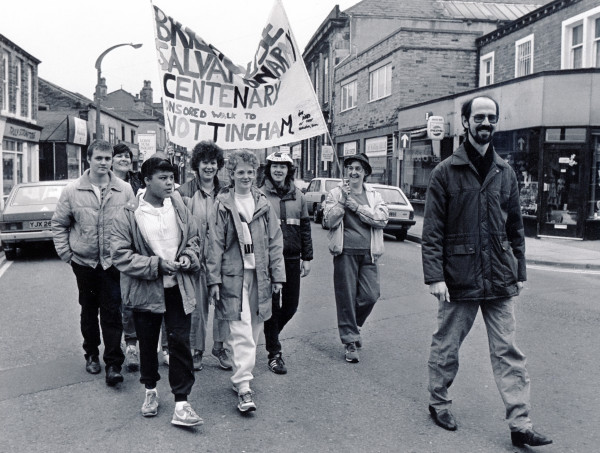 In 1995 after many hours days and weeks of renovation the old Brighouse Magistrates Court at the end of King Street became the new home of the Salvation Army Corps of Brighouse. 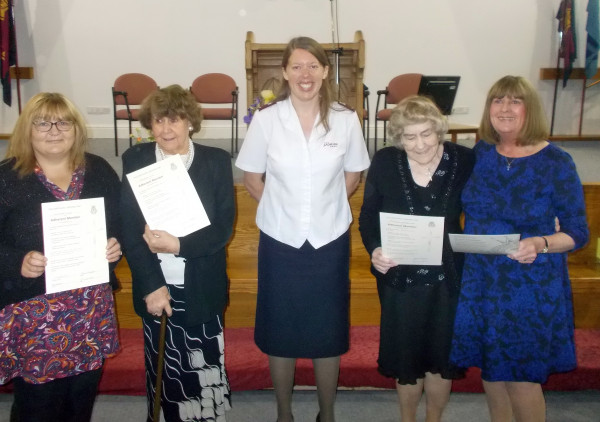 Today, the Salvation Army is known for being one of the largest distributors of humanitarian aid.

At Brighouse there is always a buzz of activities and on Saturday and Sunday the 16th & 17th September there is a celebration for 130th anniversary of the Salvation Army being in the town.

Leading the week-end will be Majors Grayson and Janice Williams who served in Brighouse in the late 1980s. The Saturday programme consists of a reunion tea at 5pm. When many former members from across the country will start their reminiscing of years gone by. This will continue with a theme of looking forward at 7pm, with a concert of music through the years. Old pictures, paper cuttings and many other pieces of memorabilia will be on show.

The normal Sunday morning meeting will be held at 10-30am with Lt. Claire Whybrow, Majors Grayson and Janice Williams. Any former member of the Brighouse Corps, either as an adult, or child from the Sunday School, youth groups, Brownies, Rainbows, Guides, or SABAC are welcome to come along. If you are wishing to come for the tea on Saturday, please ring 01484 - 401175 to ensure your place.

For further information about the Brighouse SA have a look at its website: www.salvationarmy.org.uk/brighouse