Norwood Green Memories - What about your Co-op Number? 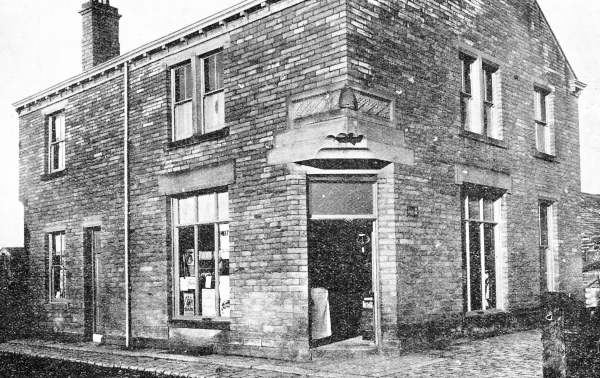 The Norwood Green co-op was the place where almost all the village residents would have done their weekly shop. The co-op opened on the 16 January 1888, and from its first day would have served the village well. Many households would have looked forward to the payment of the biannual dividend payments to help supplement their household budgets.

Many people will be surprised to hear there was a time when Norwood Green had its own Parish Council, which covered both Coley and Norwood Green districts. At the turn of the twentieth century J.B.Carter who lived at Hill End, was often referred to as Mr Norwood Green. Or as one local history book refers to him as being the uncrowned king of the district.

At the turn of the century Norwood Green was one of the last local areas to have street lights installed. By 1908 local residents were beginning to think they were not going to get any. Finding their way round in an area which although had far less dwellings than there are today was still no easy task.

It was decided that the Parish Council should investigate the possibility of purchasing and installing street lighting. Following a survey of the two areas it was decided that 64 lamps should be enough. However, when the cost of installation of the lights was mentioned to the community they very quickly changed their minds.

A new lighting rate of 1/6d in the pound would have to be levied which may have fallen to 1/3d in later years. Employment in Norwood Green in those far off days was either in the fields on one of the many farms or at the Norwood Green colliery. The workers of Norwood Green were not going to waste hard earned wages on a few lights. With no one supporting the lighting scheme it was left in abeyance and was a decision no one objected to.

For many years the local policeman in Norwood Green lived in one of the small cottages in The Poplars, off Village Street. Between 1902 and 1907 the local bobby in those days was P.C. Albert Lofthouse, who according to his son was a policeman who was liked by everyone, including the villains on some occasions.

But when you think about it, what kind of work would a policeman do in Norwood Green and Coley eight hours a day, six days a week before the First World War ? It was hardly the kind of place that was swarming with villains.

A story P.C. Lofthouse's son recalled from those far off days was the occasion his father had to deal with a sudden death. Not a death that aroused any suspicion, but was still an event he had to attend. On arriving at the cottage he was met by all the man's family, including his wife, children, relatives and a few neighbours and naturally they were all crying and very upset.

In went P.C. Lofthouse up stairs to see the deceased just to make sure there were no obvious signs of foul play being involved. Shortly afterwards the local doctor arrived joining P.C. Lofthouse upstairs.

Shortly afterwards there were loud screams coming from downstairs. Neither the doctor nor P.C. Lofthouse could immediately understand what was going on. The screams became louder and louder and it sounded as if everyone downstairs was crying. Going down to investigate P.C. Lofthouse quickly realised what the problem was.

In those days the doctor would if necessary carry out a post mortem at the deceased persons home, a common practice in those times. In those days when the ceiling of one room was the floor of the upstairs room and the floor was made of twelve inch poorly laid floor boards it takes little imagination to visualise what would be dripping through the floor boards onto the family below.

Norwood Green has always been proud of its community spirit and there have been few better examples of this than on the occasion of the St George's Mission Church Autumn Fayre. In recent times the church was closed and redeveloped for housing.

How many Norwood Green residents can remember shopping in the village branch of the Brighouse Co-op which was at the top of Village Street?  This was where almost all the village would have done their week's shopping. A real test would be to know your old co-op dividend number, something I always had to remember on the occasions I visited my local co-op branch.

The co-op branch number 14 at Norwood Green was opened on 16 January 1888 and whilst it is no long a co-op the family beehive motif is above the doorway. Just as it was on almost all the branches of the Brighouse Co-op.

If you can remember your co-op dividend number I would be pleased to hear your co-op memories.