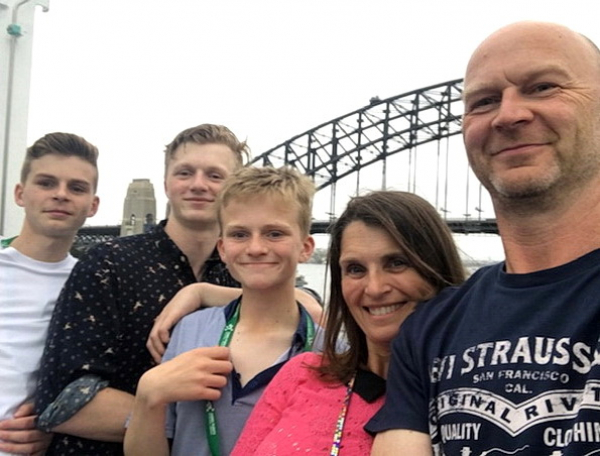 At the age of 52, looking back eight years, I was possibly more emotionally prepared than most to make a move to the other side of the world.

I grew up living on Clifton Common, near the bottom of the hill luckily, just where the old viaduct once stood with the sweet shop opposite, our only communication device the red telephone box over the road. 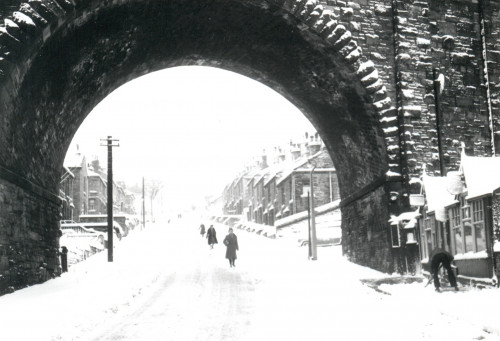 The traffic on the common must have been far less by today’s standards because I don’t remember my parents being too worried about us crossing the road to buy our daily 10pence tuck shop supply before walking to Brighouse to catch the bus to school, Woodhouse Primary, one mile away.

Living at the bottom of the Common was the best. We had the old railway embankment to explore on our bikes, all the way to the Ford behind Brighouse Police Station. Out of the prying eyes of our parents we could be gone all day. If we felt adventurous, we would cycle down to the car auctions and the M62 motorway bridge, underneath it of course and right next to the River Calder, scary thoughts now. 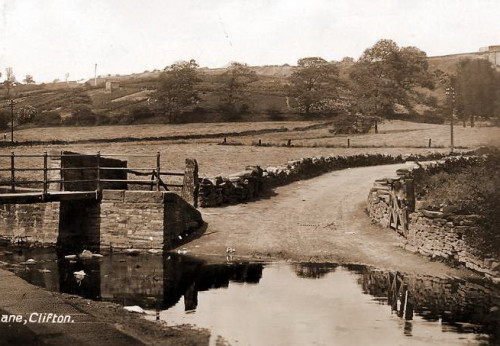 The Ford in Thornhill Beck Lane, one of Harvey's regular play areas with his friends

I remember on a Sunday being able to ride around the deserted streets of Brighouse town centre going the wrong way down the roads because there was no traffic or shops open back then on a Sunday. Hillards (Tesco, now Wilko’s) car park was our racetrack.

Brighouse swimming pool and Wendy’s fish and chip shop was the Saturday morning routine for the pre-secondary school years. 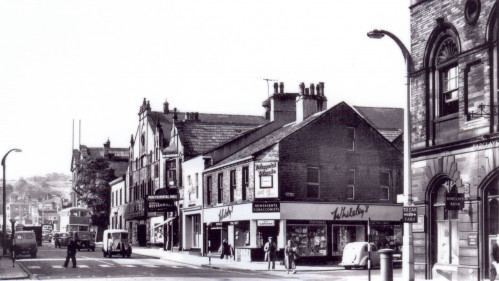 Huddersfield Road during the late 1950s. Not a lot has changed since Harvey used to call at Wendy’s fish and chip shop many years later.                     The shop is the one to the right of the van approaching the pedestrian crossing.

I moved to Lightcliffe just as I finished junior school where I attended Eastfield Secondary School and had a whole new area to explore in my teenage years. 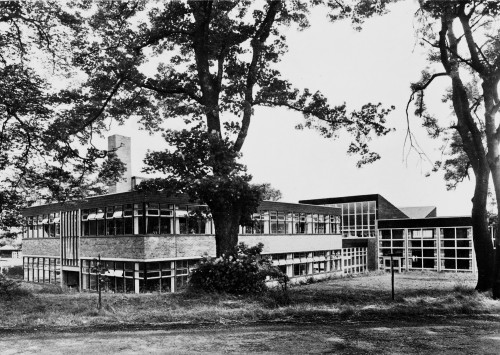 The rear of the new Eastfield School in 1969. The name was something that one of the teachers Kenneth Pickard suggetsed, and it was accepted. The name was based on the old Eastfield Chapel and Cemetery at the top of Stoney Lane, Lightcliffe.

It became apparent several teachers knew my two uncles who had previously attended this school. I think the teachers watched with interest to see if I was of the same mould: scallywags but well-mannered with a smile so not all that bad. My playground changed to the areas around Jasper Hill (great memories for sledging), the old Coach Road and the surrounding fields.

At the age of 13, I watched the process of my only Uncle and Aunty deciding to move to Canada to follow Uncles and Aunties’ footsteps by emigrating. I had visited Canada in 1976 aged eight with my mum and sister, when the UK had the famous and still talked about hottest summer on record and drought. I remember the standpipes on the street and filling up the pans for water.

It was these years living in Lightcliffe that Chris Helme was the local Bobby. It seemed Chris knew everybody and if you got up to anything Chris also knew about it soon after. He just seemed to appear from round the corner like magic, I guess that’s what a good local Bobby should be like.

I remember one occasion when my parents had fallen asleep and not come to collect me. He walked me home and delivered me to my parents and I think got a cuppa for his troubles.

I scraped by in school completing my exams and getting very average grades in most CSE subjects and having very little idea what job I was going to do. I thought I could go and work for my Stepdad, how wrong I was. No handout here but it proved to be a good life lesson for me. I soon learnt I would not be working for my Stepdad and showed no motivation to go out and get a job, I had no idea what I wanted to do.

My Mum insisted I get an apprenticeship just like my uncles had done. She drove me down to the Armytage Road industrial estate to knock on doors and ask if they had any apprenticeships going. I must have looked a right sight in my brown suit and tie and looking a couple of years younger than 16.

I was the smallest kid in my year as well. Another life lesson that has stayed with me and has been passed on to my children: If you don’t ask you don’t get.

Somehow, I ended up getting an interview to attend an aptitude test to get on the Calderdale Apprenticeship Training Scheme known as YTS to become an engineer. I got called back a week later to discuss the results and was told I had failed, and my results were that of someone with an aptitude of a 14-year-old, not 16, Ouch! Could they not have sent me a letter informing me I had not been successful. Again, another life lesson, develop a thick skin, it served me well in the years to come.

Lucky for me, it was who I knew, not what I knew that came to my rescue. Or, more importantly, who my parents knew.

I got a call from somebody else (more compassionate) at the training centre who knew my parents, asking if I could attend an interview at Womersley & Broadbent Engineering company in Hipperholme, who took on apprentices every couple of years. That kind person was the mother of Chris Helme, yes, my local bobby and friend of the family by now.

Attending the interview, my new boss to be was fully aware of my shortcomings (not passing the test) but was encouraged to give me an interview, a nice lad from a good family. We went through all the usual Q&As and at the end was asked what sport I liked. ‘Table Tennis’, I replied.

My soon to be boss’s expression changed from one of disappointment at my lack of engineering knowledge to one of curiosity. He looked at my name on his pad and asked if my Dad was David Lamb. It turned out my Dad was his adversary in the local table tennis leagues. He thought my Dad was a great guy and that was enough for him even though I had zero knowledge of engineering. I think I was at the back end of the days when people used and trusted their gut instinct to give somebody a go.

I completed my four years of training and now had my City & Guilds Certificate in Engineering and passport to get to those countries which required you to have a skill to live and work there.

I changed job after completing my apprenticeship and now engineering had become my career. I have travelled to as many as 15 countries, some more than a couple of times for my work and pleasure. It has given me a taste for a life outside of Brighouse. 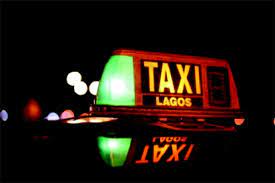 A funny experience I can share was when I got into a taxi in Lagos (notorious for kidnaps and robbery) only to find out the driver and his companion would not let me out until he got me to part with much more money than we agreed on. I  was told unless I paid up I wouldn’t be making my next plane. Like a true Yorkshireman, I argued until such a time I realised I was travelling further away from my supposed destination. Heck, it wasn’t even my money I was parting with, I had expenses. But as the saying goes, “You can’t take the Yorkshireman out of the boy”. So true to this day.

During this time, my sister moved to New Zealand and I had moved to live in Derbyshire for a new job. Again, it all seemed like an easy decision at the time and no big thing. I knew you can always move back if you do not like it, right.

At the age of about 40, I was asked if I would be interested in moving to Sydney for a job. When I got home from work, I asked my wife Debbie how do you fancy moving to Australia? We had three boys by this stage all in various stages of school and friendships but not being one to turn down an opportunity we pressed ahead.

By the time we had everything in place, the GFC (Global Financial Crisis) hit and three months before we were due to move the company I was going to work for wrote and said sorry we cannot hold the position open for you. Not to be deterred I started to look for another job to justify the hard work Debbie had put into getting our Visas.  At this stage, it was such an easy call to say oh well let's just carry on as normal in the UK, but we didn’t. 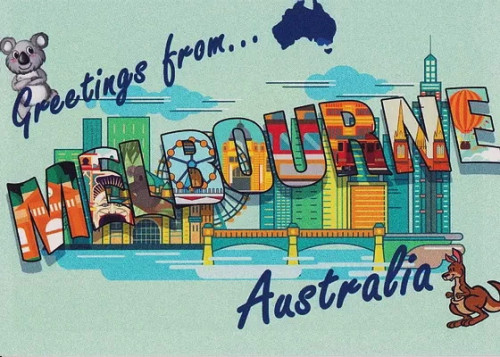 We now live just 40km from the wonderful city of Melbourne in a suburb called Doreen, sharing the area with the local wildlife, Kangaroos, Wombats and Possums, yes Possums are a real thing and not just a Dame Edna saying. We have lived here for eight years now and have only seen a couple of snakes and a few infamous redback spiders. Australia likes to talk it up maybe to stop more Poms from filling the place up. Australia is up there being one of the best countries to live for young families. The outdoor lifestyle is something else and my only regret would be we didn’t make the move when I was in my 30s.

I am working as a sales engineer selling industrial 3D Printers, these are just part of the new and very exciting world of technology.

Is Australia forever? Who knows, it is just another move away right? And the best thing is, my boys think exactly the same thing.

Search in Letters From...