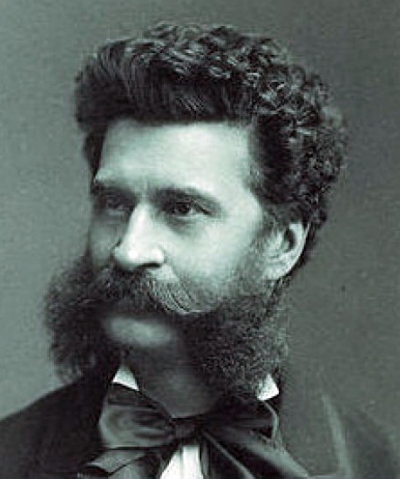 Johann Strauss II (October 25, 1825 – June 3, 1899), son of Johann Strauss I, was an Austrian composer of light music, particularly dance music and operettas. He composed over 500 waltzes, polkas, quadrilles, and other types of dance music, as well as several operettas and a ballet. In his lifetime, he was known as "The Waltz King", and was largely then responsible for the popularity of the waltz in Vienna during the 19th century.

Strauss had two younger brothers, Josef and Eduard Strauss, who became composers of light music as well, although they were never as well known as their elder brother. Some of Johann Strauss's most famous works include "The Blue Danube", "Kaiser-Walzer" (Emperor Waltz), "Tales from the Vienna Woods", and the "Tritsch-Tratsch-Polka". Among his operettas, Die Fledermaus and Der Zigeunerbaron are the best known.

Die Fledermaus or The Bat, sometimes called The Revenge of the Bat) is an operetta which was premiered on the 5 April 1874 at the Theater an der Wien in Vienna and has been part of the regular repertoire ever since.

The overture for Die Fledermaus was arranged for brass bands by British composer and arranger Aubrey Winter (1870 - 1955) and it is featured in this show played by the Fodens Band conducted by James Scott in 1978.