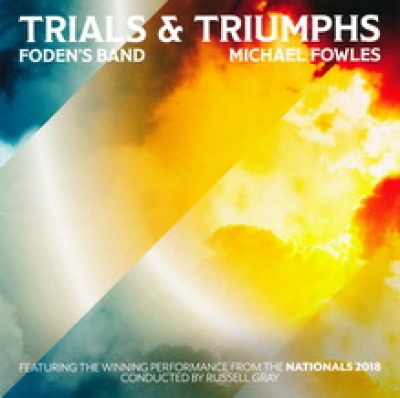 This latest offering from Foden’s tells a story. The sleeve notes highlight a period of two years in the history of the band – firstly the destruction of the bandroom in 2016, then the disruption and hard work created by re-energising the band following that massive setback. The culmination of the two years was the win at the Royal Albert hall on the Test Piece – Handel in the Band by Kenneth Downie.

The recording starts with Phoenix Rising by Tom Davoren. It’s title inspired by just one of the messages of support received by the band on social media in the aftermath of the fire on Sunday 17th April 2016. The piece is very lively and brash in character – I found the balance of the recording very much favouring the top end cornets just a bit too much for my liking, notwithstanding the playing was fantastic throughout.

Dukas’ Sorcerer’s Apprentice follows and is truly excellent, the dynamics and tone of the band are top-drawer and MD Mike Fowles’ reading is brilliant.

Song For Eilir features Mark Wilkinson in a cornet solo written by Robin Dewhirst (who plays piano on this recording) in memory of the cornet player and husband of Anna Hughes-Williams (who is Repiano with Foden’s). I think it is perhaps taken too much for granted just how good Mark Wilkinson is as a musician, his mastery and musicality in this piece is special indeed.

The band’s winning performance of Handel in the Band – recorded live at Royal Albert is the next offering. The piece is a passing reference to Percy Grainger’s piece ‘Handel in the Strand’. The choice of piece as the final’s test piece was welcomed, in many ways – it is a technical ‘tour de force’ but still maintains nice lyrical music throughout. The band were clearly on blistering form and this track will satisfy any test-piece aficionados out there.

The next few tracks are titled – Kings and Queens. Pieces used as the band’s Brass in Concert programme in 2018. All of them written by members of the band – Jonathan Bates, John Barber and Iain Mc Knight.

The Crowning – starts the set, written by Jonny Bates, is a ‘classic’ Ceremonial Fanfare based on the hymn Westminster. I liked this piece very much and it really did take me to Westminster Abbey to witness one of this country’s coronations.

Eternal Source of Light Divine features the magnificent Gary Curtin as euphonium soloist in a set of variation, again by Jonny Bates, on the ‘ode for the birthday of Queen Anne, originally composed by GF Handel. Musical wizardry and perhaps the best euphonium playing I have listened to for absolute ages – Bravo Gary. This is a very entertaining piece to listen to indeed.

The King of Swing – aka Benny Goodman is the inspiration for John Barber’s composition in true Big Band Style. Foden’s show just how capable they are in completely changing playing style and really ‘swinging’. Excellent!

Seaside Rendezvous – Freddie Mercury, arranged by Iain Mc Knight. Not the style of music you would expect from the iconic Freddie Mercury. Described on the excellent sleeve notes as ‘having echoes of music hall, vaudeville and no small amount of saucy seaside humour’. I let the notes say it all.

Send in the Clowns, by Stephen Sondheim is a truly classic song and would find a place on many a band’s concert programme. But with ‘The King of Brass in Concert” – Mr Richard Evans as the vocal soloist? What I heard was a deeply personal rendition by Richard of the song and I couldn’t help listening far more deeply to the words than ever before. This version is not a novelty item but is a truly worthy performance.

John Barber’s Thy Tribute Bring is the ‘closer’ to the Brass In Concert set on the CD. It has more than a passing similarity to the opening number – in style at least and successfully brings the Kings and Queens themed programme to an excellent conclusion.

The finale to the disc is Derek Bourgois’ last composition before his death – Trials and Triumphs commissioned by Foden’s to commemorate their double National Hat-Tricks of the 1930s.

Think Bourgois – think, musicality, technique and emotion. All of that in spadesful here. Foden’s on terrific form again. There is a ‘story’ here. The contest day starting with tensions, giving way to music in different styles before the final ‘big tune’. Very very good.

The whole recording oozes quality in every sense of the word, it is brilliantly put together and led by Mike Fowles. The music is varied and is played in a virtuosic style throughout.