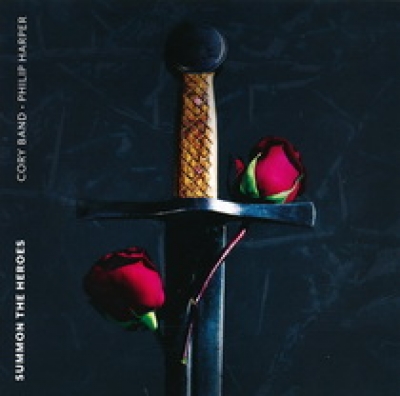 The introductory item on the disc, Summon the Heroes, is a transcription for brass band by Philip Sparke of music written by John Williams for the opening ceremony of the 1996 Olympic Games which were held in Atlanta, It provides an ideal opener with its fanfares, a very nice melodic section from solo cornet and some rhythmically interesting episodes.

The rest of the music is divided into three sections under the headings of; Classical Heroes, Hero of Literature (William Shakespeare) and Globetrotting Heroes.

In the Classical Heroes section we have Franz von Suppe’s overture Morning Noon and Night in Vienna in the classic arrangement by J. Ord Hume. I must say I prefer the old arrangements of these classic overtures to some of the modern versions. I thought the opening was rather pedantic. The stylish melodic euphonium solo was contrasted with the clinically clean faster sections. This is a classic performance and will be pleasing to those of my generation.

Vaughan Williams’ English Folk Songs Suite, whilst not so old as the Suppe overture, is also a reminder of my playing and conducting days and makes enjoyable listening. The other item in this classical heroes section is an arrangement by Owen Farr of the finale from Haydn’s Cello Concerto. I’m not familiar with this work but it does provide an excellent vehicle for the talents of horn soloist Ailsa Russell, and it does seem to me to be more suited to the fluency of the horn than the smooth articulation of the cello.

All the seven items in the middle section headed Hero of Literature – William Shakespeare are arrangements by Philip Harper, some well-known and some lesser-known, (certainly to this reviewer). O Verona by Craig Armstrong sets the scene of the feuding Montagues and Capulets in Romeo and Juliet. Caribe is a somewhat lighter jazzy interpretation of the feuding families and the Love Theme from Tchaikovsky’s overture to Romeo and Juliet is beautifully interpreted by husband and wife soloists Glyn and Helen Williams.

Clans Collide is Philip Harper's interpretation of the bloodthirsty episode when Tybalt kills Romeo’s friend Mercutio. Harper’s Lament portrays the family’s grief as Juliet fakes her own death on her wedding day. The well-known Liebestod from Wagner’s Tristan and Isolde provides a beautiful episode and Bernstein’s Somewhere, from West Side Story is emotionally presented.

In the Globetrotting Heroes section, Denzil Stephen’s arrangement of Night Flight to Madrid lightens up the tensions of the previous section and Andrew Wainwright’s The Spirit of St Louis is an interesting piece with its contrasting styles. Philip Littlemore’s arrangement of Huapango by José Pablo Moncayo is a colourful piece and the recording ends with Ray Farr’s arrangement of John Williams’ theme music to the 1984 film Indiana Jones and the Temple of Doom.

Over the years Cory Band has been consistently among the world’s premier bands and this recording confirms their rating. Their programmes are always interesting even if the content is not always to everyone’s liking. Over the past few years, particularly since Philip Harper took over as musical director, that the band has not only maintained their high standards but have lifted them to a higher level. Of course, he has an excellent team of players around him and it is this dedicated team that continually produces and maintains the high standards they have achieved.

Improved recording techniques obviously play a part in the final result and the more I listen to present-day band recordings, the more I realise that finding faults in either the band’s performance or the recording is getting beyond my capability.

There is a choice of old and new music on this disc that will please listeners who enjoy good music performed at a high level.