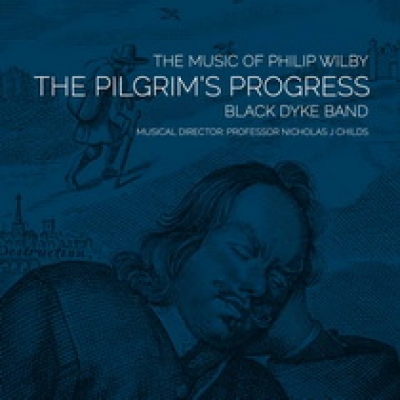 This album of music by Philip Wilby is issued to celebrate the composer’s 70th birthday, which falls within this year and it also marks Nicholas Childs impressive 100th recording with Black Dyke.

Five Rivers, a pastoral symphony for brass band, opens the programme with music that reflects the landscape of the North of England. The rivers, called Aire, Wharfe, Nidd, Ure and Swale, form the skeleton of the Yorkshire Dales and the work illustrates their progress throughout the four seasons of the year, in the ever-changing light. A beautiful unaccompanied flugel solo sets the scene for a superb musical performance that is full of colour and drama. This work is in two parts.

Beyond Far Horizons Sailing West, and the following item was inspired by the seafaring history of the city of Bristol and sailing journey that Philip Wilby took on the SS Tangaroa bound out of Bristol en-route to Penzance. This demanding music requires every member of the band to play an individual part and the instruments are divided into separate choirs of sound. Clarity of parts and dynamics are a feature of this performance, which few bands could match.

Written in 2012 for flugel horn virtuoso Zoe Lovatt-Cooper. One Star: Sailing West, marks the final piece of a sequence of solo's composed for Black Dyke band's soloists. The work has two movements played without a break. Ably supported by the band, Zoe makes this virtuosic  piece sound easy and presents and exquisite performance.

Cinema, a work for organ and brass band was first performed by Leeds City organist Darius Battiwalla with Nicholas Childs and the Black Dyke Band in Leeds Town Hall, on Sunday June 3, 2018. The piece is in the form of a Concerto Grosso where the organ acts as soloist and accompanist in equal measure. The first celluloid film was shot in Leeds on October 14, 1888 (hence the title) and this excellent concert item, the music depicts drama, outbursts and calmness.

Composed in two parts, The True and Tender North is described by the composer as a simple symphony for brass band. Part one contains small dedications to Black Dyke band's founding fathers namely Ric Perkins, Dave Peterson and Gordy Nilsen who played cornet, euphonium and tuba respectively. Who are memorialised in a melodic trio, and later snare drums mark's the band's marching heritage.

Part two commences in a melodic style before the music becomes full of energy and completes the piece and the programme with a flourish.

This is an excellent album full of Black Dyke band's glorious sound in all of the impressive performances of music from the pen of arguably the foremost composer of brass band works. Philip Wilby's comprehensive programme notes give a clear background to this splendid music.

The True and Tender North