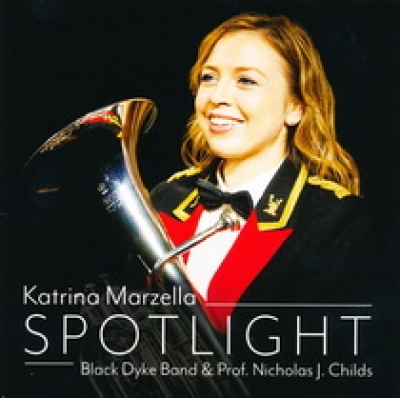 The disc opens with ‘Napoli by Bellstedt, arranged by Brenden Wheeler. Although the playing is first class the fact that it is at a lower pitch than the traditional Bb cornet version, for me loses some of the sparkle. Stephen Robert’s setting of The Lark in the Clear Air really does work, a fine arrangement and a superlative, musical performance.

Rampage by Simon Dobson shows Katrina’s forward thinking as a player. Based on Robert Burns Tam O’ Shanter Ride it is a complex work demanding a sense of adventure allied to great technique with some interesting tone colours.

With his first Breath by Paul Lovatt-Cooper shows how a great musician can bring to life simple melodies with elegant phrasing and a true cantabile production. Brenden Wheeler’s arrangement of Eric Spence’s Scottish song Alone with my Thoughts is a piece to which previous remarks also apply

The main work on the CD is Peter Graham’s baritone concerto Turbulence, Tide & Torque. Inspired by three 19th century heroines it is in three movements and over 15 minutes long. A real tour de force! Peter paints musical pictures of air, sea and land and his programme notes give a good insight into this work. Katrina captures the characteristics of each movement with all her considerable talents on show.

A lovely duet with Zoe Lovatt-Cooper on flugel horn follows, One Summer Morning written by Edward Gregson reveals the musical rapport between the two players. Peter Graham is also the composer of The Holy Well’. Originally a euphonium solo, Katrina’s huge, warm sound shines through. The final track Be My Love by Brodszky and arranged by Ray Farr is a link to Katrina’s Italian ancestry, finishing on a gorgeous high C.

A disc recorded between 2014 and 2019 it is a fine example of the virtuosity, musicianship and wonderful sound of this exceptional player. The band accompaniments are first class and the sleeve notes very informative.

I would highly recommend this CD.

2. The Lark in the Clear Air - Traditional  arr: Stephen Roberts

4. With His First Breath - Paul Lovatt-Cooper