Musicals 2 - The Household Troops Band of the Salvation Army 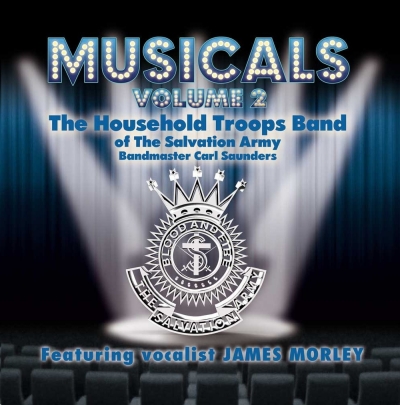 The Household Troops Band of the Salvation Army

For this reviewer the very mention of musicals takes me back to the 1960s, playing in the summer park engagements, when arrangements from a musical were on every programme.

This CD, Musicals 2, produced by the Household Troops Band of the Salvation Army is a refreshing addition for the modern brass band listener and follows up on its successful 2016 CD Musicals 1. With a blend of music and singing from the older musicals, they share the stage with those from the modern era.

The CD has a rousing opening with Martin Cordner’s Call of the Gospel, which has been arranged from Gowans and Larsson’s musical 'Take Over Bid'. The second track This is Me is from the recent unexpected success 'The Greatest Showman'. This song won a Golden Globe award for the best original song and Michael Brown’s arrangement fits nicely into the brass band concert genre.

Andrew Lloyd Webber is represented by a new arrangement from the pen of Stephen Bulla of Memory from the musical 'Cats'. This arrangement was given to the band and is performed by the band’s principal cornet player Troooper Daniel Robson. This is a refreshing change from the familiar arrangement by Alan Catherall.

Gowans and Larsson are again represented on this disc with Jesus Folk which was first written in 1972, this arrangement has been written by the late Lt. Col. Ray Steadman-Allen.

I Don’t Know How to Love Him from 'Jesus Christ Superstar' by Andrew Lloyd Webber and Tim Rice dates back to 1970, and has been a brass band favourite on the concert circuit. Arranged by J. Graham Walker and usually played as a flugel horn solo, on this track we have Trooper Andrew Piper who is the featured soloist this time as a clarinet solo.

One of those musicals played by this reviewer many times back in the 1960s and 70s was Mary Poppins. On this CD there is an updated arrangement from the pen of Andrew Duncan. All the familiar songs are present and would be well received on the brass band concert circuit, whether it was back in the parks or an indoor concert. Particularly after the release of the new film Mary Poppins Returns in 2018, and would appeal to a new and younger brass band audience.

'The Sound of Music' Is the film musical that audiences went to see time after time, with cinemas showing it week after week. A regular on the Christmas TV schedules and it is still as popular as ever. On this disc, we hear vocalist James Morley who gives a wonderful performance of Climb Ev’ry Mountain which has been arranged by Philip Harper.

Moving on through hits I have a Dream from 'Mamma Mia', arranged by Klaas van der Woude and Don’t stop me Now by Freddie Mercury from the musical 'We Will Rock You' and arranged by Philip Harper, it is now time for another solo.

The CD’s first brass solo is tenor horn soloist Trooper Neil Blessett who makes his appearance playing Over the Rainbow from 'The Wizard of Oz'. Goff Richard’s arrangement of this classic song has been around for many years and is still a favourite of both soloist and audience alike.

A trombone feature is next on the programme and is another wonderful arrangement by Goff Richards, I will follow him from the 1992 film musical 'Sister Act'. You get the sense listening to this performance that the trombone players of Troopers Mark Sharman, Gary Rose, Howard Elliott and Paul McGregor are really enjoying playing this piece.

The second piece from 'The Greatest Showman' is A Million Dreams and brings back vocalist James Morley to deliver this song. Here is another wonderful performance from this combination of singer and a brass band. A combination that other bands should perhaps consider for their own concerts with the introduction of a single vocalist (other than at a Proms Night concert), this will add another dimension to a brass band concert.

It is now time for the band’s euphonium soloist to step forward with Trooper Anthony Smith playing A Simple Message from Gowans and Larsson’s 1972 musical 'Glory'. This has been arranged as a euphonium solo by Trooper David Edmonds, who is a member of the band’s cornet section.

The big piece for this CD is The World’s Greatest Storyteller, which has been skilfully arranged by Philip Harper. This work is a tribute to the master storyteller Roald Dahl. The arrangement highlights music from three musicals, 'Chitty Chitty Bang Bang' (which Roald Dahl wrote the screenplay), 'Pure Imagination from Willy Wonka and the Chocolate Factory' and features Trooper Anthony Smith on euphonium, and finishes with 'When I grow up' from Matilda. If your band has not played this work yet it is certainly one to consider for a future concert.

The CD closes with The Candle of the Lord from the musical 'Break Through' which features songs from the pen of Major Joy Webb.

Having listened to this CD several times, some of the pieces are tried and tested and are still enjoyed by bands and audiences everywhere. The inclusion of the newer pieces would bring a refreshing change to a brass band programme. This CD has some excellent playing, fine soloists and the fabulous voice of James Morley.

With very informative sleeve notes I would highly recommend this CD, and look forward to sometime in the future to a third volume.

Tracks from this CD will be regularly appearing on the Sunday Bandstand weekly radio show on this website.