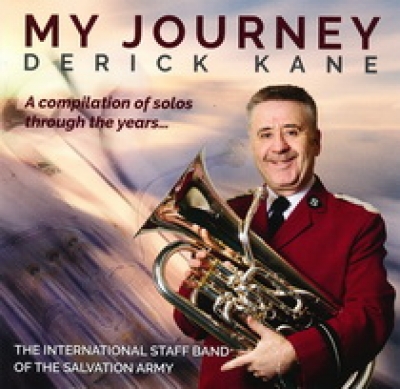 If anyone solo had to be associated with Derick it must be the opening track The Better World by Norman Bearcroft. It remains a favourite for top euphonium players but derrick has really made it his own. Fine technique, his warm singing sound, but most of all his fine musical approach sum up the attributes of this performance.

Several air and variation solos are featured and they all reveal the qualities outlined above. However, it is in the slow works that his devotion to the purposes of SA music is most apparent. The first is again by Norman Bearcroft, Jesus I come to You, played with such ease and simplicity yet conveying the meaning of the words with emotional sounds and wonderful phrasing.

William Himes’s Journey into Peace is perhaps the most profound work and reward revisiting. Richard Phillips arrangement of In Christ Alone is another example of Derick’s cantabile style, set against a bolero-like accompaniment.

One work is actually written by Derick himself and is called That’s the Spirit and you can sense the enjoyment in this performance. The bonus track sees Derick and his son Stephen performing The Flower Duet by Delibes and arranged by Derick.

What a career he has enjoyed, joining the ISB in 1976 and giving over 40 years of service as principal euphonium to the band. As a solo CD, it is one to dip into but every track will reward the listener. The sleeve notes are excellent.