The Music of Bliss and Howells 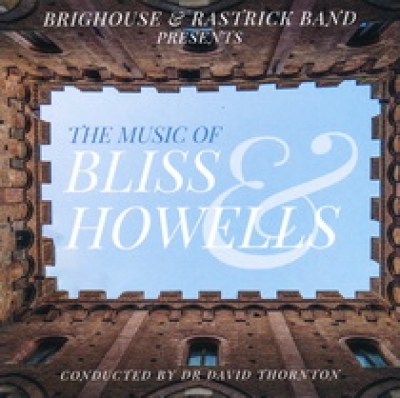 The CD features the major brass band works of both composers plus two new transcriptions also Bliss’s Fanfare for the Lord Mayor of London (1967), which opens the disc in sparkling fashion.

In 1960 Frank Wright’s arrangement of Herbert Howells Three Figures marked the Centenary of the National Brass Band Contest in London. The work pays homage to three former prominent brass band personalities: Samuel Cope, John Henry Isles and William Rimmer. The first movement entitled Copes Challenge is firm in style and moves with purpose towards a triumphant close; Iles’s Interlude is peaceful with phrase of solo work, whilst Rimmer’s Race goes with a will to a rousing close of a satisfying performance.

Kenilworth, a suite by Arthur Bliss, was first heard at the Crystal Palace Championship 1936. The work is based on the visit of Queen Elizabeth I to Kenilworth Castle in 1575. The three movements are: At the Castle Gates, Serenade on the Lake and March. The first movement has a fanfare style, the second allows the band’s soloists to shine and the third has clarity throughout. This is an enjoyable musical performance, but the three movements are not quoted on the sleeve booklet – a glaring error!

Composed in 1922 / 23, Howells Requiem remained until publication in 1980. Dominic Longhurst, a former member of Brighouse and Rastrick Band, has arranged the first two movements for brass band and this lovely music is beautifully presented.

Sir Arthur Bliss’s Greetings to a City was written in 1961 for the brass section of the American Symphony Wind Orchestra to play from the banks of the River Thames. Paul Hindmarsh has adapted the music to produce a telling contrast in dynamics that is delivered with confidence.

Composed in 1937, Bliss’s ballet Checkmate included a number of popular tunes and the Ceremony of the Red Bishops from Four Dances from the ballet is a delightful presentation.

Frank Wright’s masterly arrangement of Sir Arthur Bliss’s Belmont Variations was the test piece for the National Brass Band Championship in 1963. A work comprising of a Theme, six variations and a finale is presented with aplomb. The cadenza for cornet, euphonium and trombone is particularly notable. A very fine performance.

The suite Pageantry by Herbert Howells has proved to be a true musical test having been used at the British Open in 1934, the National in 1937 and the National Championship in 1950, amongst others. The titles of the three movements conjure up a picture of the court life of knights and their courtiers in the Middle Ages. ‘Kings Herald‘ features fanfares and the knights gather, ‘Cortege’ depicts the thoughtfulness of the knights as they prepare top joust and ‘Jousts’ describes the high action of this dangerous form of battle. Noteworthy is this excellent performance of arguably Howell’s finest brass band work.

An enjoyable album of music of much of which has stood the test of time.

8. Ceremony of the Red Bishops from Four Dances from Checkmate - Sir arthur Bliss - (1937)