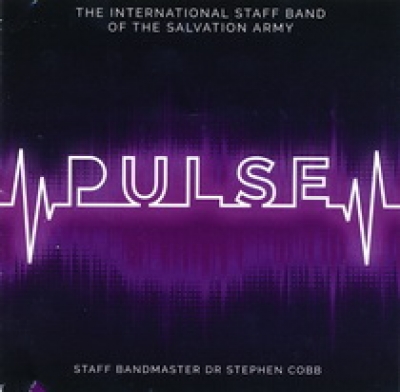 Every track on this CD is new music that has been offered to the Salvation Army.

Let there be Light by Stephen Ponsford sets a cracking pace showing off the band’s technique, sound and style. Still by Andrew Blyth is in complete contrast. Using his own material, a Hillsong chorus and the fine tune Repton, Andrew presents a piece of reflection and the band responds with cantabile playing even in the louder dynamics. The work ends quietly with a sense of stillness.

Martin Cordner’s title track Pulse uses a motif from which the music evolves with an energetic opening, through a slow section and ends with an engaging finale.

He Watches by Joel Collier is written in memory of those killed in the horrific shooting into a crowd of concert goers on 1st Oct in Las Vegas. The music portrays the conflicting emotions of the survivors from darkness to hope. The playing is suitably sensitive. Carl Neilson is one of the unsung heroes of the ISB. Until his appointment as principal cornet his name wasn’t as familiar as established soloists such as Derick Kane et al. However, he never puts a foot wrong as his playing shows in the solo Compelled by Paul Sharman. In the form of a Rhapsody, Carl’s musicianship and unerring facility shine through.

Kenneth Downie’s Johavah Nissi- the Lord is my Banner employs several established songs in a work that is meant to challenge Christians to stand firm in their faith. After an invigorating start it contains both reflective and triumphant music. The Living God by Dorothy Gates is a very personal piece written when her father died which led her to question her own faith. The music contains a sense of struggle with dark colours before resolving in the belief that all will be well.

Stephen Ponsford’s The Armour of God is based on chapter 6 of St Paul’s letter to the Ephesians. The six parts of the armour are skilfully represented by appropriate musical styles and is the longest piece on the CD, requiring and getting artistic direction from the conductor and first class responses from the players.

Paul Sharman’s At the Cross was written for the commissioning of SA officers (Ministers) in 2014 and uses four songs that are linked to the title. The final track Variation on Was Lebet by Andrew Wainwright contains five variations of extracts from the tune and each one is written in a different style. Only in variation five is the full melody employed in a wonderful conclusion.

Throughout the CD the direction and performances are of the highest level and the sleeve notes are comprehensive. If this is a taste of what is to come from these gifted composers the future is bright.

i) Belt of Truth ii) Breastplate of Righteousness iii) Shoes of Peace iv) Shield of Faith v) Helmet of Salvation vi) Sword of the Spirit - 15.00