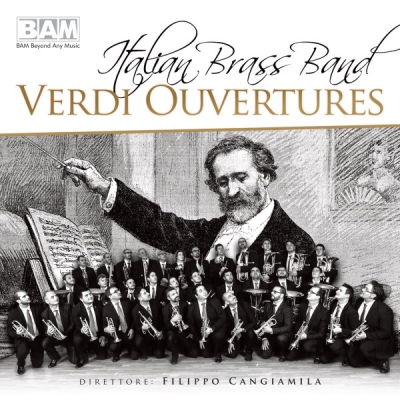 Oberto Conte Di San Bonifacio, a two act opera was premiered on November 17,1839. Set in Northern Italy in 1228. It is a romantic love triangle that ends with one main character being killed, another goes into exile and the third becomes a hermit. The overture has a wealth of melody and is delivered with aplomb.

Nabucco, a four act opera premiered in March 1842 at La Scala Milan, established Verdi's reputation as a composer. Set in 587 BC in Jerusalem and Babylon, it follows the plight of the Jews as they were exiled from their homeland by the Babylonian King Nabucco. The crispness in the opening of the overture contrasts well with the control of the Chorus of the Hebrew Slaves.

Giovanna de' Arco, an operatic drama with a prologue and three acts, was premiered in February 1845, at La Scala, Milan. Set in 1429 in France, it reflects the story of Joan of Arc, without following conventional history. For she leads the French Army to victory and died from battlefield wounds. The overture shows control of dynamics whilst the solo cornets and soprano blend well.

I Masnadier, an opera in four acts, is set between 1755 and 1757 and was premiered on July 22, 1847 at Her Majesty's Theatre, London. The highlight of the disc is an aria beautifully played by the euphonium soloist Luciano De Luca, excellently supported by the Italian Brass Band.

First performed on January 27, 1849 in Rome, La Battaglia Di Legnano, is an opera in four acts and set in 1176 in northern Italy. It tells the story of the troops of the city of Milan who free a nearby town of the occupying German Emperor Barbarossa. The performance of the overture excels. The story is clearly told.

La Traviata , a tragic opera in three acts of unrequited love and subsequent death. This opera received its first performance on March 6, 1853, at Teatro La Fenice, Venice. The calm and dignified music, of a little over three minutes is sensitively presented.

I Vespri Siciliani, is an opera in five acts, it was premiered on December 26, 1855 at Teatro Regio, Parma. The story is loosely based on the historical event of 1282 when the Sicilians rose up against the occupying French forces. The overture is a quality presentation that includes some notable solo work.

Premiered on February 17, 1859 at the Teatro Apollo, Rome, the three act opera Un Ballo in Maschera loosely tells the story of the assassination in 1792 of King Gustav lll of Sweden. The King is attacked whilst attending a masked ball. The music is a joy  - melody follows melody - a pleasure to hear.

La Forza Del Destino, an opera in four acts, was premiered on November 10, 1862 at Bolshoi Kamenny Theatre, St Petersburg. Set in Spain and Italy c1750. This tells the story of love, war and revenge with most of the main characters being dispatched one by one, This was an exciting performance of the most difficult music on the CD.

This first recording by the Italian Brass Band of brass band arrangements of Verdi's music is most enjoyable. Filippo Cangiamila clearly understands the music and directs performances to a high standard. I look forward to hearing further recordings of this band.