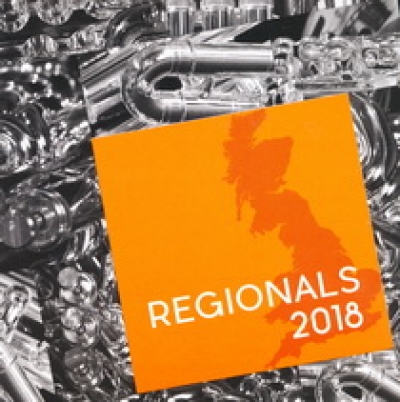 The disc features five pieces chosen to test the bands in the 2018 Regional Contests of the National Brass Band Championships.

Odyssey by Kevin Norbury. is the chosen test for the Championship section  and is performed by Brighouse and Rastrick Band conducted by Allan Withington. The work portrays an imaginary journey of a human soul from the darkness of the earth bound situation to the light of spiritual union with God.

The opening bars are dark and brooding but following a number of stylistic changes the music becomes high spirited and ends triumphantly.

Soli Brass, directed by Jan de Haan, performs Brass Metamorphisis (James Curnow). the set test for the first section bands. The work consists of five variations based on an original theme, with the motif returning throughout the piece. The first variation is presented in a rondo for and is incisive, the second variation is slow and intense, the thirds variation is a lively scherzo, whist the fourth variation is slow and expressive. The final fifth variation has a majestic quality and brings the composition to a close. This piece with its changes of style and character will be a stern test for many of the first section bands.

The second section piece, is Ex Terra Lucem by Jonathan Bates. This was composed for and dedicated to Jay Hall (musical director) at St Helen's Youth Brass Band and is performed by Foden's Band and conducted by Michael Fowles.

The work has three separate and contrasting sections but played continuously. The first section entitled 'The Brigantes'  portrays a Celtic tribe that settled in an area where ultimately the counties of Yorkshire and Lancashire would be formed.  The music reflects the traditional Celtic musical elements. The second section, 'St Elyn's Chapel', was said to be the crux of four small townships that eventually became the borough of St Helen's. The core of the music is reflective and tranquil and pays homage to sir Arthur Bliss and eric Ball. The third section is entitled 'From the Ground. 'Light' ...'

St Helen's  prospered from the coal mining industry and the industries that burn coal to produce 'Light', and to recognise this the council coat of arms bore the motto Ex Terra Lucem.  The music portrays this industry by a quiet cornet opening that gradually builds to the thunderous clunks and clangs of machinery before the 'Light' emerges at the close.

Third section bands will tackle Philip Harper's Napoleon on the Alps and is performed by the Cory Band conducted by the composer. The piece is based on an early 19th century oil painting of Napoleon crossing the alps. The work has three parts, the first part entitled 'Approaching the Great Saint Bernard Pass'. This vividly depicts the determined march of Napoleon's army towards the crossing. Part two titled 'The Emperor Napoleon' depicts the army's arrival at the scene by fan fares and heroic music. Part three called 'Onward to the Empire' describes Napoleon's relentless drive to expand the French empire. A confident solo cornet will be required for the opening fanfare of part three and percussion is busy throughout the piece. The bands will enjoy rehearsing this descriptive work.

World Tour by Rodney Newton was commissioned in 2006 by the Besses O' Th' Band to mark the centenary of its world tour. Black Dyke Band conducted by Professor Nicholas Childs, perform this excellent choice for the fourth section bands. The work has four distinct movements.

Firstly, 'The Leaving of Liverpool', within which care will be needed to change temporarily and smoothly into a march. The second movement, titled 'Chicago Rag', and requires the bands to capture the correct style and mood.  The third movement, 'Pacific Paradise' is reflective and will allow the bands to display their tonal quality. Whilst the fourth movement , 'Australian Walkabout & Homeward Bound' features the well known song Waltzing Matilda. This is delightful music and will be ideal for future concerts.

Within each of the five pieces an important element  of the performance will be the interpretation of the music.

a) The Leaving of Liverpool