Through The Flames - The Music of Paul Lovatt-Cooper Vol. 3 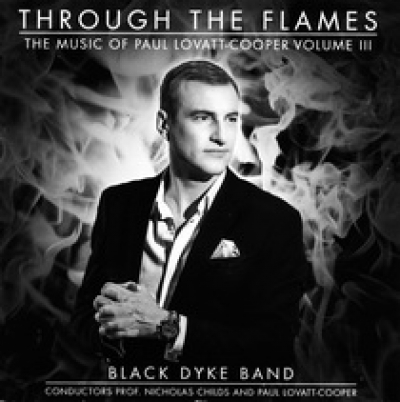 Paul Lovatt-Cooper has made a name for himself as one of our foremost composers. His works have been performed in many of the great concert halls both in this country and abroad. Apart from his compositions for brass band he has written for TV shows, films and has produced works for international soloists and ensembles.

Whilst his music is not to everyone’s taste it is always interesting in its variety of styles. There are those who might say that it does sometimes get a little repetitive with its strong rhythmic elements but that is a matter of personal opinion.

This CD is the third compilation of the composer’s music and has a playing time of nearly 80 minutes. It contains 13 works. Most of the items on the CD are commissioned works.   Through the Flames is 3½ minutes of exuberance with the odd nice tune thrown in. It makes a fitting opener.

Programmatic in form, Tale of the Dragon has an operatic story line as it tells of a young brave soldier who slays a fearsome dragon that has been terrorising the people of an ancient Japanese empire and by so doing he wins the hand of the emperor’s beautiful daughter.

Commissioned by the composer’s old school Jubilance is light and bright and would fit well into any band programme.

There are two solos on the recording. Taken from one of his earlier works, With His First Breath provides a haunting melody for baritone soloist Katrina Marzella whose simplistic treatment of the tune is gorgeous. By Trevone Bay paints a picture of one of the secluded coastal areas of Cornwall. It must be a beautiful place if it matches up to this performance by flugel horn soloist Zoe Hancock.

The Final Voyage tells the tragic story of the fateful last journey of HMS Hampshire during the First World War when extreme stormy conditions cause the ship to break up and sink with only 12 survivors. Heroism and bravery are dramatically portrayed in this music.

Full of feeling and reverence this arrangement of the hymn tune Lloyd never loses the beauty of its simplicity.  It was commissioned by friends of mine, Wayland and Yvonne Roberts and is dedicated to Wayland’s father. Different sections of the band take turns to play the tune before it is brought to a regal close.

In contrast the fast moving piece Streamline Peaks captures the exhilaration of an exciting railway journey through the beautiful Swiss Alps.

The Life Within is a real tour-de-force and at over eleven minutes is the longest piece on the disc. Two contrasting themes are developed throughout the work giving opportunities for soloists to demonstrate their skills.

Following a march like introduction, When Thunder Calls then uses different sections of the band to quote the main theme in a variety of styles before fanfare of cornets bring the piece to a resounding close.

Flying the Flag is a lively march. It has some traditional elements with a robust bass solo. It is enjoyable to listen to and I think bands would enjoy playing it.

The penultimate item, Road to Run is a pleasant concert piece that would fit nicely into any band programme. It is lively and features different sections in the band.

Fire in the Blood was written for the International Staff Band of the Salvation Army and is based on three worship songs along with some of the composer’s own material. It creates a dramatic finale to the disc.

As one expects from this band their performance throughout is faultless so that listeners can focus their attention on the music. I found the whole recording to be very interesting.