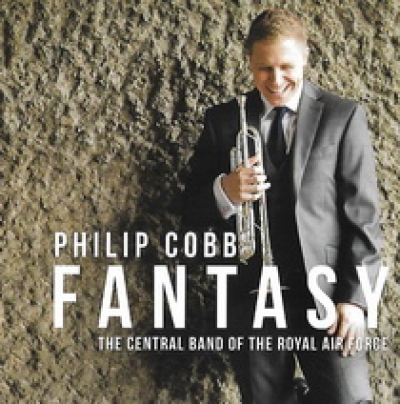 With the Central Band of the Royal Air Force

This is quite a stunning CD, not only through the brilliance of this fine soloist, but also the remarkable support of the Central R A F Band, the most notable effect of the Military Band are the exciting sounds and authentic colours displayed in the opening track Slavische Fantasie

Philip himself is a most humble young man as he makes several references to many of our ‘great’ past cornetist, Maurice Murphy, James Shepherd, Wynton Marsalis et al.

His versatility on Cornet, Trumpet and Flugel is outstanding and his technique is quite brilliant as demonstrated in The Debutante. The format of this program allows a little respite between dazzling displays and excitement to let us relax a little in his beautiful rendition of A Trumpeters Lullaby before we return to a brilliant performance of the Grand Russian Fantasia, which again is delivered in true Slavic sounds by the band.

The next solo is an arrangement from Wynton’s Cornet Album and is a superb arrangement with brilliant playing of Napoli before we can sit back yet again and enjoy perfect phrasing and tone quality throughout the register in Rusalka’s Song to the Moon supported sympathetically by some lovely woodwind accompaniment in particular.

We finally get to hear him on Trumpet as he performs Harry James’s  Concerto for Trumpet as a tribute to Maurice Murphy and Rod Franks, all previous Principal Trumpet of the L.S.O

This CD has featured some fine arrangements together with some quite stunning and often very moving playing by Philip Cobb, all totally augmented by quality, controlled and sensitive support from an outstanding band in the Central Band of the RAF ----a superb CD fully recommended.

11.Springtime can really hang you up - Wolf and Landersmann Arr: Martin Winter -   5.46