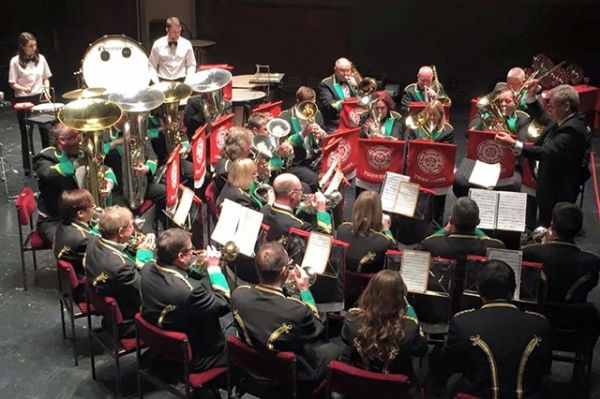 In the glorious summer of 1976 on thre outskirts of Leeds, near Morley, a new junior band was taking its first tentative steps in the world of brass bands.

The band progressed so well that in 1983 the older players of the junior band and the remaining members of the Bradford Victoria Band came together which saw the birth of the new Drighlington Brass Band. This photograph shows the band enjoying better times.....

Like any new brass band it wanted to join the contesting circuits and was soon stepping out on to the contest playforms in the 4th section.  The band had an incredible rise to the top and by 1991 it had gained championship band status. Although not destined to regularly maintain that championship section position, it has held its own in the first section. The band took part in this year's Yorkshire Area Brass Band Championships held at Huddersfield where from the twelve bands taking part it was placed a creditable 6th place. The band has played at many prestigious concerts as well as what might be described as the bread and butter concerts, the ever popular park engagements throughout its compatrative short history..

Away from the contesting platform it has always been prominent in the popular march and hymn contests.

Sadly, in recent times the band has fallen on hard times with the retention of players and the availabilty of replacements creating a serious problem.

This is where you might be able help. The band committee took the difficult decision to reduce the number of weekly rehearsals to one which is on Thursday evenings at 7.45pm. The band would dearly like to see or hear from anyone who would like to call in at the bandroom to one of the Thursday rehearsals. The band like many others is actively trying to recruit from an ever decreasing number of avalable players.

Drighlington Band will not be the only band that is finding it difficult to recruit players. Other bands may be in the same position as Drighlington and if the empty seats are not filled the band may have to take the reluctant decision and bring the band's previously successful history to a close. If a band is in that same situation merging two bands together could be a solution and one worthy of discussion.

The band meet at:

The band can be contacted on email:     This email address is being protected from spambots. You need JavaScript enabled to view it.

It is 42 years  since the junior band first started and went on to develop into a quality band. Please try and help at its hour of need.

For further information about the band please have a look at its website: http://www.drighlingtonband.co.uk/