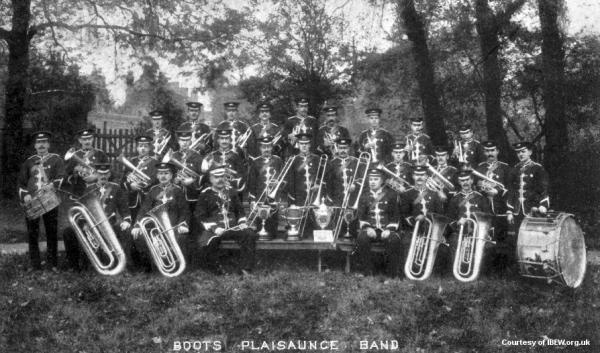 Jesse Boot, of Boots Chemist fame was keen to promote music making and musical appreciation amongst company employees, and within Nottingham generally

In 1906, when a campaign was launched to restore the Albert Hall, in Nottingham, Jesse Boot offered to spend £5,000 on a new organ, on condition that the organist provided popular recitals every Saturday afternoon with a fair number of seats not exceeding 3d each.

Jesse Boot funded the organist's salary for three years. At Plaisaunce, the Boot family's summer house, employees were invited to afternoon entertainments, with music, dancing, athletics, swimming, and in the evenings sometimes fireworks.

It was Jesse Boot who provided a set of instruments for the use of an employees' band, and the Plaisaunce Band was formed.

Jesse Boot arranged for the band to be coached by a professional conductor, Mr Alexander Owen, and in June 1908 the band made its first venture into competitions at Lincoln. In 1909 the band won first prize in the Junior Cup section in the National Brass Band contest at Crystal Palace. Reformed after the First World War and affiliated to the Scout Movement, the band had the honour of being the first civilian band to play on Wellington Barracks Square.

Another conductor of this band was E.J.Else (no further information) who is believed to have had connections with the Royal Artillery band.

The band later re-formed as the Beacon Silver Band, but its playing days came to an untimely end when the instruments were destroyed in the bombing of the Printing Department building on Station Street in 1941.

In this photograph the band are wearing very elaborate uniforms and proudly showing off some silverware from some of its contest successes. I wonder what happened to any of this silverware and other band memorabilia ?

The Boot's script logo which is displayed outside all Boots Chemist shops can be clearly seen on the bass drum.