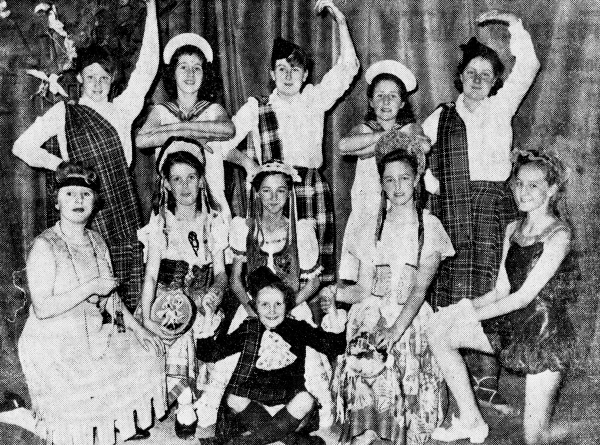 Here we are again in 1959 this time with members of the Kathlyn Hobson School of Dancing. These were just a few of the members who took part in a dancing display in the Parish Hall Church Lane.

In this show there was a little bit of everything from hula -hula girls in grass skirts to senoritas in tight-waisted exotic dresses.

To get the evening off to a graceful start was Denise Sugden and Anne Shackleton with a display of ballet. Then in stark contrast was Rita Vickerman who led a small group in the Charleston whilst the youngsters which included Katherine Sutcliffe, Janice Richardson and Joan Naylor firstly playing the part of cupids and rag dolls.

Miss Hobson was not just the dancing teacher but she also made all the costumes. This included the spiders outfit in the little Miss Muffet nursery rhyme which was played by Stella Freeman who for this part needed all her skills as an acrobat.

The grand finale was in military style with sisters Eunice and Beryl Firth leading by a performance dancing to the hornpipe. This led to everyone else joining in to a varied military style ending.

This photograph shows just a few of those who took part in what was another triumph production for Kathlyn Hobson.