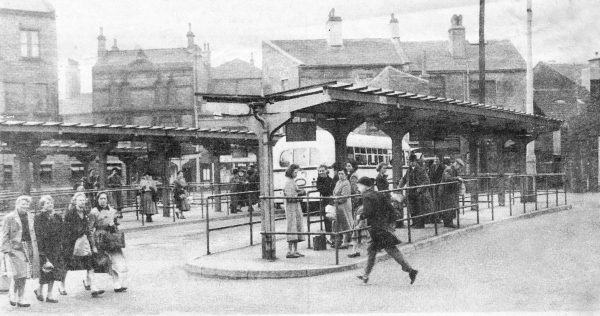 The year is 1957 and whilst it might not be the most memorable for Brighouse, looking through the newspapers quite a lot did happen that year.

The mayor and mayoress for 1956 and 1957 were Alderman Harry Edwards and his wife Elisa. They were the last couple to hold the office  for two consecutive years, after that the office of mayor was an annual appointment with a new mayor being appointed each time.  Interestingly the local member of parliament (Brighouse and Spenborough) had the same surname. He was the Rt. Hon. John Edwards and someone who was spoken of in those days as the best representative Brighouse had had to that time.

Almost everything in this photograph has gone now, the corner of Barclay's bank on the left and the younger people are all that are left.

This bus station  was built on the old open borough market site. When the market was not open the site was often used as an open area to hold meetings, particularly during the war years.

I wonder if any of the four young girls who just happened to walk into the photographers lens are still around Brighouse today ?     Back in those days, 60 years ago, they were Janet Willoughby, Doreen Pickersgill, Margaret Airey and Elaine Berry. All four were students at Rastrick Common School, and judging from the bags they are carrying, they have all been on the town shopping for bargains.

'Penny for your thought's', I wonder what thoughts were going through the mind of the man with his head looking down over the bus railings at the road?

Looking beyond the bus aisles the buildings include 36, Briggate Earnshaw's jewellers, looking further back in time c1915 at 38, Briggate was a young man called John Wesley Hillard who had a grocery shop. Little did he know then that in the 1970s his name would be blazoned on the town's first supermarket, almost on the same spot he had his small grocers shop. The tall building which was known as Bank House.  If only it had been allowed to stay and cleaned up, it would stood out as a feature of the town centre.  The building to the right is the back view of Collinson's grocery and provision store.

This was also the year that Brighouse had traffic lights placed at the Royal Hotel junction, gone had the days when a young constable was drafted in from Police Street to do point duty. When it was heavy rain and even slight flooding, there was no let-up for the young constable, he was brought an orange box to stand on. There was no point duty on this spot by the time I arrived at Brighouse police station. The redevelopment scheme of the late 60s and early 70s had changed the town centre completely. W en the new bypass carved its way through the town and other roads were upgraded.   The change was complete when Sainsbury's supermarket arrive twenty or so year later.

The British Legion Hall was opened by Earl Scarborough, he took the salute from an impressive parade as he looked down from the wide path outside the front windows what is now the Fresh Smile Clinic at the bottom of High Street.

The last station master at Brighouse station up to it closing in 1970 was Arthur Horsfall, he was appointed  in 1957. As he started his new appointment he would have missed out having the chance to buy the 'full monty' from Burton the tailors in Commercial Street.  This outfitters opened in 1934 and was formally opened by members of the Burton family and closed in 1957.

We did have someone make the international news that year. Lightcliffe Racing driver Robert Walshaw raced over the line with a very creditable 13th place in the Grand Prix at Le Mans.

This race was the final curtain of a racing career that started back in the 1930s. Once over the line he announced to the waiting press that he was retiring from motor racing and rally driving. During the race he touched speeds of 125 mph on the straights and averaged 90 mph throughout the 24 hour race.

Motor racing was not his only achievement, in 1952 he was part of a three-man team which made a record breaking drive from London to Cape Town, in a Humber Super snipe in a remarkable 13 days, nine hours and six minutes. I can't imagine that having retired he would be sat in home at Leyburn Avenue at Lightcliffe looking back over his racing career or doing a spot of gardening. He must have done something else that was action packed and almost death defying.

The end of 1957 closed with a big plus for the area with the new reservoir being officially opened on the 27 November  at Badger Hill, Rastrick. 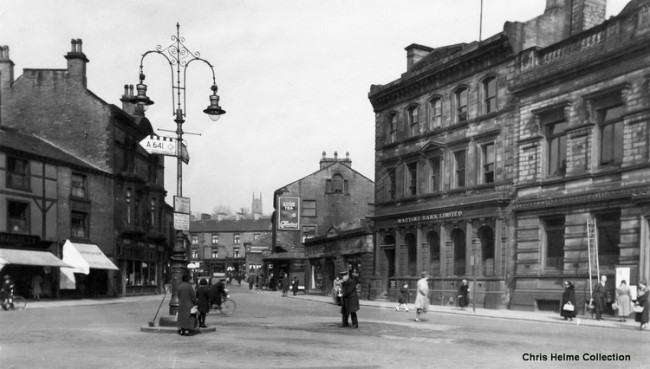 Briggate during the 1930s the bus station photograph take just over twenty years after this one the buildings this side of Collinson's, Earnsahw's with Bank House standing almost as high as Barclay's bank.

I would be pleased to hear from anyone from Brighouse area with any particular memories you have of 1957 - 60 years ago.