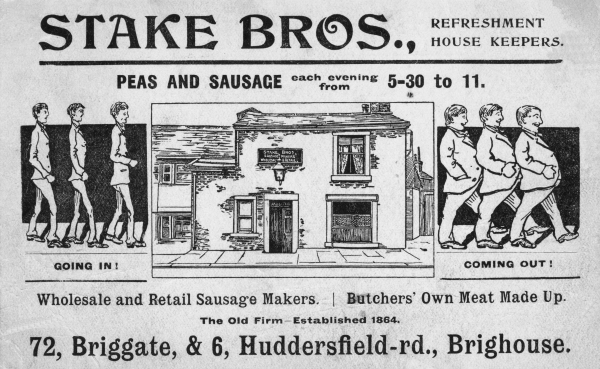 It is over fifty years ago that what can almost be described as a local institution closed in Brighouse. An establishment that had been open for almost a century and was known across the generations.

This was a business who’s doors were first opened it is said by a lady known locally as ‘Sausage Sarah’. A lady who quickly established the business gaining a reputation par-excellence for her home cooked peas and sausage. These premises can probably be named as Brighouse’s first Take-Away.

Yes, many of you will have got the clue. It was to become known as ‘The Bow Window’ at 72, Lower Briggate.

It is said Sausage Sarah first opened the business as early as 1864. It was when the Stake family took it over that its reputation grew far beyond even their expectations and their town centre customers. I believe it was in 1895 when Helliwell Stake bought the business and was later joined by his younger brother Harry.

Harry realised the potential of this little shop in Briggate, and went on to open a similar shop in Huddersfield under his own name.

Helliwell was later joined at the Bow Window by his son Edmund and as the years went by this little shop just over the Anchor Bridge became a household name.

In October 1959 after a life time of serving the ‘a ha’poth, two and a muff’ or to the uninitiated an order once translated which meant .. a half penny worth of peas, two sausages and a tea-cake…. Edmund Stake was living at 17 Daisy Road and decided that time was catching up and it was time to retire.

From 1949 the business had only been opening three days a week which compared to its heyday when it would have been opening  six days a week, quite often until very late at night. Even the three day week was still to provide him with a nice living - such was the reputation of his business.

Times were changing though, something we say all to often even these days. The  days of stepping down from the road side on to his wooden floor and eat as one regular once said, ‘Eat as much as you could for a bob’. The days of children bringing their own jugs and basins to eat out their peas and sausages had become a thing of the past.

This advertisement picture for their business would probably draw serious criticism these days, but did in its time reflect the success of their business. Whatever people think of it today doesn’t really matter because all those generations who visited what was an institution in Brighouse would never hear a wrong word said against it.

We would be very pleased to hear your memories of what became an institution in Brighouse town centre.